Forecast is partly to mostly Companion

The Big Three - Kirk, Spock and McCoy - are stuck in a shuttlecraft with Miss Hedford, a real peach of a Fed commissioner, when they crashland on a planet and meet a guy whose girlfriend is a big cloud of electricity. It's all like a very bizarre episode of Sex and the City.

This is the episode to which former ST head honcho Rick Berman said "Continuity? Fuck that!" when they started writing the movie Star Trek: First Contact. Kirk plainly states that Zephram Cochrane is "from Alpha Centauri." You could quibble that ZC just lived there later in life, but that's baloney. You KNOW what Gene Coon meant when he wrote that line.

There's also a kind of internal gaff where Spock doesn't recognize Cochrane when they first meet, but Spocks later says "The name of Zefram Cochrane is revered throughout the known galaxy. Planets were named after him. Great universities, cities." Spocks knows all this but doesn't know what the guy looks like? Come on! Spock's a walking Blackberry, he would know what Zephram Cochrane, "the discoverer of the space warp," looks like. This was a mid-second season episode, so they really couldn't pull a line like, Well we're still developing Spock's character and abilities. Minor quibble but still.

I really like elements of this episode's story. The weird non-humanoid alien that falls in love with a human and he doesn't even realize what’s going on. The alien taking over the body of a human to both prevent both her and itself from dying, and the alien continuing to live but in a way totally foreign to it. I love that stuff.

I just wish they could have had some moments between Commissioner Hedford as herself and Cochrane. (If Kirk could fally madly in love after two hours with Reyna the Robobabe, Cochrane could have spent a few minutes getting to know the Commish before the Companion joins with her.) It's sort of not fair to Hedford that the Companion joins with her and seems to be the dominant force. We know the Companion loves Cochrane, but, in a way, now it's going to force Hedford to love him too. This really is like Sex and the City!

For a mid-second season episode, Kirk does something really stupid. After establishing that they are stuck on the planet, and Spock discovers the Companion is mostly composed of electricity, Kirk has him whip up a black box thingy that will short circuit the Companion, possibly killing it. Then when Cochrane calls the Companion, Kirk waits until it has ENVELOPED Cochrane before telling Spock to throw the switch. Cochrane is violently thrown to the ground, and this PISSES OFF THE COMPANION to no end (it even turns from yellow to red!). Old ZC saves their hide and later Kirk asks Spock to monkey with the Universal Translator so they can talk to the Companion. WHY THE F--K DIDN'T KIRK DO THIS THE FIRST TIME! Yeah, it added some drama, but it was totally out of character for Kirk do to that. There was absolutley NO RESPECT shown for this totally new life form. Yes, it was holding them prisoner, but it had a reason!

Oh, and Commissioner Hedford was a total BITCH! And this was before the Ooga Booga Sickness took effect. In the beginning of the episode, she's sitting right behind Kirk and Spock who are piloting the shuttlecraft. They CLEARLY explain that something unknown is in their path and won't let them get around it, then that their instruments cease functioning. She responds, "What's happening? I demand to know." and "I insist you make your scheduled rendezvous (with the Enterprise)!" Yeah, just before everything went wonky in the shuttle they established that she has a war to prevent on Canary-in-a-Cage III or wherever. But she obviously never LISTENS, so how could she mediate any sort of conflict?

I liked Cochrane's bachelor pad though. Reminds me of places around here. 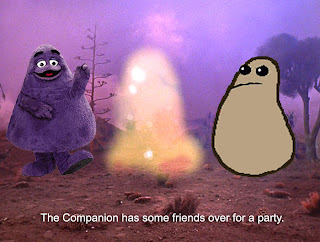 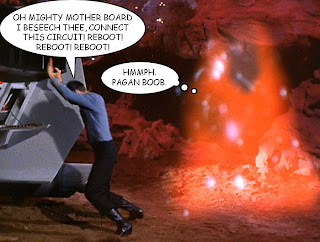 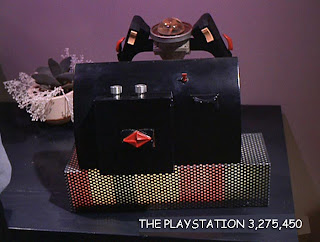 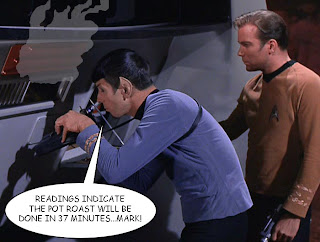 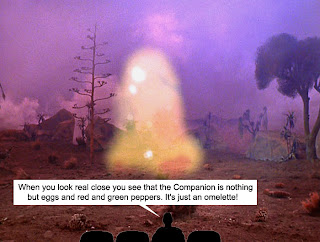 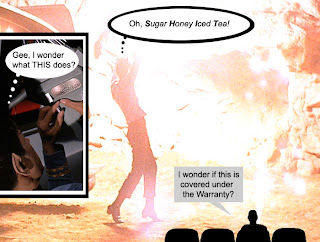 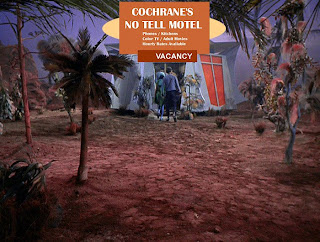 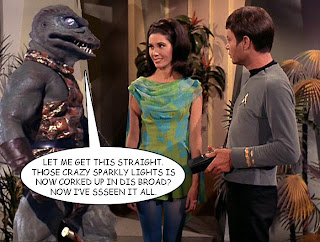 Thanks to Trekcore.com for the Star Trek screencaps.