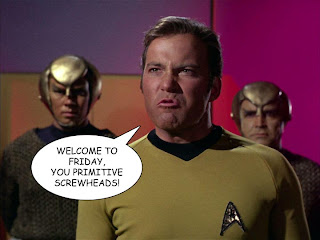 Star Trek is Copyright 2011 and a Registered Trademark of CBS Studios, Inc. No infringement of these rights is intended with this parody. Screencaps from Trekcore.com.
Posted by Michael at 12:26 PM No comments:

One Beamed Over the Cuckoo's Nest

One upon a time, boys and girls, the USS Enterprise stopped by the looney bin in a TOS episode called, "Whom Gods Destroy." It was run by Master Po before he shaved his head, lost his vision and started hanging around with David Carradine.

The inmates were revolting, er, I mean they revolted under the leadership, magnetic smile and smelly fur coat of Garth of Izar (seriously, did he ever dry clean that rag, it must smell like Chewbacca's crotch on a warm day), not to be confused with Garth of IZOD, the clothing magnate of Krypton (company motto, "KNEEEL Before My Shirt's Crocodile!").

Anyhoo, Garth is running the show on Elba II and he's itching to take it on the road, so he needs a ride, and what better wheels than your own friggin' starship (it's even been washed and detailed). But James T. ain't no dope; he and Scotty concocted a safe word based on a popular board game, like Chutes and Ladders or Hungry Hungry Hippos or something.

Garth spends the rest of the story trying to trick Kirk into giving up the secret word (say it really, really loud with me Pee Wee Herman fans: "Queen to King's level one!"). He offers Kirk power, glory, you know the usual stuff. Hell, Garth even throws Batgirl at him. At that point, I'd have squealed the secret recipe to KFC chicken AND Coca Cola, but not Kirk. Move over Superman, cause Jim Kirk is the real Man of Steel!

All's well, that ends well. Kirk and Spock (using Starfleet Academy's little known "Hit Me Over the Head So I Fall Down and Let You Two Fight It Out Until I Can Figure Out Whose Ass I Should Phaser" technique) defeat Garth and his Insane Clown Posse, free the asylum's overseer Dr. Donald "Duck" Cory, zap out all the bad and evilness from Garth and also got to check out the asylum's cafeteria, which actually has a 2 star Michelin Guide rating. 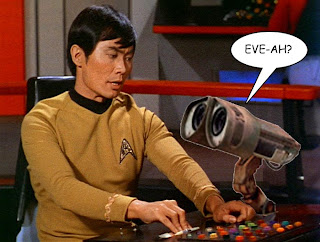 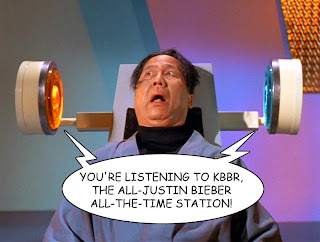 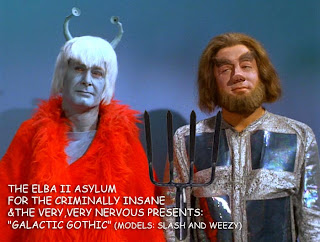 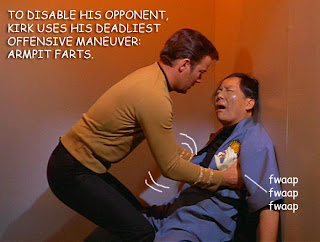 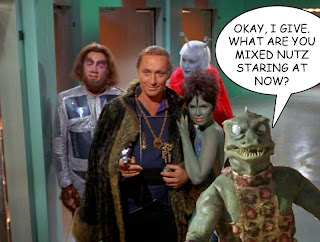 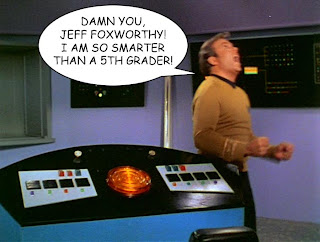 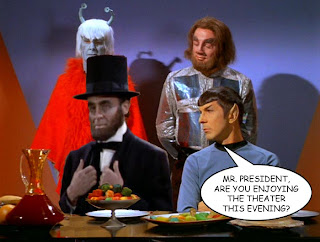 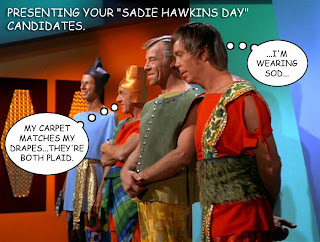 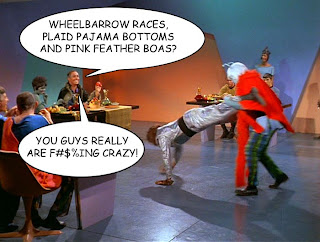 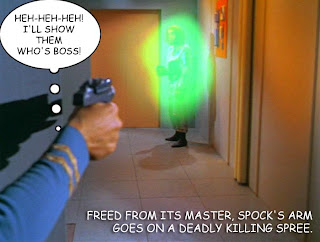 Star Trek is Copyright 2011 and a Registered Trademark of CBS Studios, Inc. Wall-E is Copyright and a Trademark of Pixar/Disney. No infringement of these rights is intended with this parody. Screencaps from Trekcore.com.
Posted by Michael at 4:39 PM No comments:

She Can Kill You With Her Little Finger

What do you get when you make Jason Bourne 16 years old, and a girl? You get Hanna, but you lose a lot in that conversion process.

Hanna, well played by Saorise Ronan, is raised in isolation near the Arctic Circle by her father (Eric Bana). They live in a ramshackle fairy tale cabin. It seems that papa is a former CIA black ops agent, and he's passing all those survival and fighting skills to his daughter: Hanna is a pint-sized assassin.

But what's an assassin without a target? Enter dad's former boss Marissa Viegler (Cate Blanchett, with an extra large Texas drawl). However, the movie, written by Seth Lochhead and David Farr, is fairly muddy as to exactly why Marissa is doing what she's doing, which leaves an unsatisfying impression with viewers (none of use who watched the movie together could put a finger on what was Marissa's motivation).

Director Joe Wright handles the action scenes well enough, as we knew he could do the quieter moments in this story after directing Pride and Prejudice and Atonement. The major problem is the pacing.

The story resembles The Bourne Identity in that both follow super-assassin main characters who are unsure of their origins. Both stories take our heroes across several countries: Hanna starts in upper Finland, moves to Morocco and then to Germany. It's when she meets this traveling hippie family in Morocco that the movie nearly grinds to a halt. Hanna was raised in isolation in one location by her father and now she's introduced to other people, cultures and places. She also makes her first friend, winningly played as a hyper teen by Jessica Barden.

A lot of the culture clash material was interesting (Hanna discovers electricity, but also the constant noise of our modern society, even at night), but it went on far too long. It was almost as if they took two films, one an action flick and the other a coming of age drama, and edited them together. The story went from heavy action in the beginning to the culture clash to rather dull before remembering its action origins.

Hanna is certainly not a bad movie, but one that may play better on DVD when you can fast forward a bit through the dull parts.
Posted by Michael at 7:03 PM No comments:

Guidos and Guidettes in Space 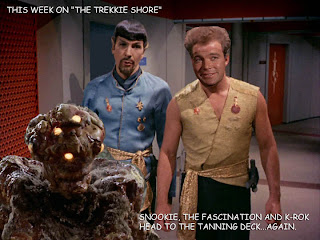 What? It's the latest episode of the hit series TREKKIE SHORE.

Set your phasers to tan, orbit da club, and beam 'em down. What?

Star Trek is Copyright 2011 and a Registered Trademark of CBS Studios, Inc. No infringement of those rights is intended with this parody. Screencaps from Trekcore.com.
Posted by Michael at 7:58 PM No comments:

You all know Buckaroo Banzai, don't you? Among other things, he was a physicist, neurosurgeon and a rock singer fronting the band the Hong Kong Cavaliers.

Doug Drexler may be the closest thing the world of Star Trek has to Buckaroo Banzai. He started out as a special effects makeup artist (winning an Oscar for his work on the underrated Dick Tracy), moved into graphic design illustration, and then into CGI visual effects.

He has one of the coolest blogs around, Drex Files, wherein he shares the wealth of material on the projects he's worked on, with special emphasis on Star Trek and Battlestar Galactica.

And now he's got another installment of Drex TV, his video blog look at the stuff we fans love. Check it out: http://drexfiles.wordpress.com/2011/04/14/drextv-04-temporal-sonar/
Posted by Michael at 6:42 PM No comments:

The Master of the Movie Poster Image

Recently, I made a trip to the Academy of Motion Picture Arts & Sciences building in Hollywood to scope out their exhibition of Bob Peak movie poster artwork. Not familiar with the name "Bob Peak?" Do you recall the posters for such films as Superman: The Movie, Camelot, Apocalypse Now, West Side Story, Every Which Way But Loose, In Like Flint, Rollerball, The Spy Who Loved Me, and the first five Star Trek motion pictures? Then you've seen Peak's amazing work.

Peak has been called the "father of the modern movie poster" for his brilliant designs and use of collage to depict scenes from the films. His use of color and especially light was second to none -- look at the energy in this image Peak created for Prince of the City: http://tinyurl.com/3ot7jam.

My only disappointment, if you could call it that, was I was expecting to see brush strokes or little smudges on the original artwork. Instead they were absolutely perfect pieces, almost like photographs (there were a few pencil roughs for some of the posters, and those were on slightly crinkled paper). I did find it amusing they had to touch up the Silverado poster. The large main figures are all on horseback, with the horses splashing in water, and there is brush spatter (imagine using a toothbrush to fleck specks of paint) that hit some of the smaller portraits higher up in the actual artwork. Those were touched up for the final poster printing.

If you can't make it out to Hollywood, please check out the Bob Peak website http://bobpeak.net/. You will be delighted and thrilled.
Posted by Michael at 1:16 PM No comments: