Artist John Byrne has some fun pin ups at his website Byrne Robotics.

If you're an X-Men fan, he revisits a piece he did for the Comics Reader back in the day, where he put the "all new, all different" X-Men into the original team's school uniforms.

Then he flips that idea on its head and puts the Fantastic Four in original X-Men style uniforms. I wonder if there is a "What If?" story hiding in here somewhere.

And lastly, he gives us this great looking "future girl soldier" piece, where the partial coloring gives it a distinctly European or Heavy Metal magazine vibe. I'd love to seem a scifi story done with this woman.
Posted by Michael at 1:06 AM No comments:

AMC's The Walking Dead just aired its fall finale. What a long, strange trip it's been.

Our intrepid band of zombie apocalypse survivors has slowly been coming apart (a little too slowly this season), mostly over the handling of The Search For Sophia, Carol's daughter and Carl's friend, who went missing after the group encountered and evaded that awesome Zombie Herd (TM) on the highway in this second season's opener.

Shane (Jon Bernthal), he with the chest which makes Arnold Schwarzenegger openly weep, is going into uber-survivalist mode: he will do anything - kill anything and anyone - that stands in the way of his safety, and of those under his protection. Of course, this philosophy directly conflicts with the views of his best friend Rick (Andrew Lincoln), the show's star and the erstwhile leader of this ragtag group, who still believes in notions like civilization and respect for other people's viewpoints and property. Rick and Shane will ultimately come to a reckoning - a "Come to Jesus/George A. Romero" moment - and I believe that's gonna be a brutal, ugly thing (which is great for a post apocalyptic survival horror-drama).

I blame the firing of Frank Darabont for the meandering this show has taken in its second season. The first season only had six episodes and then-showrunner Darabont kept the plotting nice and tight. Season two has twice the episodes (13 eps, actually) but they appear to have stumbled a bit with the transition from Darabont to current showrunner Glen Mazzara. The search for Sophia and the stay at Herschel's farm has taken up the most of the entire first half of the current season, with a lot of that "spinning our wheels, going nowhere" feel during much of it.

How many times did they have the scene of the gang gathered around a map on the hood of a car mapping out search grids as they attempted to locate Sophia? It could be its own Internet meme. Plus, Lori's whole "I might be pregnant but I'm not going to tell my husband storyline" was drawn out so much I thought they might finally resolve it after she gave birth to the kid and he or she went off of Post Zombie College.

The last ten minutes of the fall finale, "Pretty Much Dead Already" almost, and I mean almost, makes up for the slow plotting and pacing that came before it, with Shane going bugnuts (he made a lot of sense in that scene - and Bernthal was great) at the barn and those utterly heartbreaking final moments (my jaw was on the floor).

The Walking Dead is perhaps my favorite show on right now, but I sincerely hope that the plotting gets tightened up for the last six episodes of the season. If this episode is any indication, they are on the right track.
Posted by Michael at 10:27 PM No comments:

Martians And Kung Fu, But No Martian Kung Fu

Here are some new pics from the upcoming and eagerly anticipated JOHN CARTER, directed by Andrew Stanton (Finding Nemo and Wall-E). from io9.com

I never read the pulp novels, but I recall fondly reading the Marvel Comics adaptation "John Carter: Warlord of Mars," with the curvaceous Dejah Thoris, the four-armed Tharks, and assorted Martian strangeness.

Also found on io9 is this wackass Chinese fantasy kung fu movie called Demon of the Lute. They feature a clip where the hero is first attacked by some ninja-types with hidden trampolines (trampoline fu, as Joe Bob Briggs might say), then a bald dude with an orange goatee. Mr. Orange travels by way of a cannibalized Radio Flyer wagon-as-chariot pulled by a pair of German Shepard dogs.

Mr. Orange - who could film a Rogaine commercial when he magically grows a full head of orange hair that would put Carrot Top to shame - could cut down on the between-meal snacks as they have to speed up of the footage of the dogs pulling the wagon or those scenes would take up the movie's whole runtime.
Posted by Michael at 11:20 AM No comments:

Movie car chases usually get all the glory, but now EmpireOnline.com has this great piece up featuring "35 of Film's Best Foot Chases."

There's some amazing and even fun stuff here, everything from Ferris Bueller's crazy run home to beat his sister Jeannie, to the cool efficiency of the Bourne films. Also included are foot chases from recent films like Inception, Kontroll and Kung Fu Hustle, and also classic films including French Connection II, Bullitt and Blade Runner.

Lace up your sneakers and join in, won't you?
Posted by Michael at 11:58 PM No comments:

A Lizard and a Toaster Watch Movies

Move over Roger Ebert, Nomad & The Gorn are gettin' into the movie review biz. 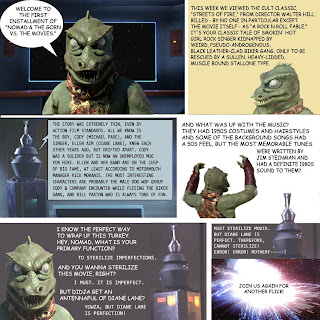 Star Trek characters copyright 2011 by CBS Studios, Inc. No infringement of their rights is intended with this PARODY. Screencaps from Trekcore.com
Posted by Michael at 12:08 AM 1 comment:

Show? Out of Danger?

David Letterman isn't known for his movie parodies, so this recent gag is a bit of an oddity.

Dave starts the normal Top Ten List countdown and something gums up the works - perhaps a particle of pre-animate matter caught in a matrix.

He sends a stagehand downstairs to investigate. Now either Letterman is a closet Trekkie, or someone on the writer's staff got a favor called in. And check out the use of James Horner's music in the piece!

(I found this courtesy of a post at the John Byrne Forum.)
Posted by Michael at 8:33 PM No comments:

That message has always been appended to the end credits of every James Bond film since the first one in the series, Dr. No, appeared on screen in 1962.

The latest Bond, Daniel Craig, will return to the 007 role in the just announced Skyfall, slated to appear on screens in November 2012. (From the L.A. Times' blog Hero Complex.)

Is it me, or does the title not sound very exotic, very Bond-like? Skyfall? Skyfall? Put it up there next to You Only Live Twice, The Spy Who Loved Me or even the last film, Quantum of Solace, or even the single word titles like Thunderball or Moonraker (we can leave out Octopussy).

Oh, well, at least it's not Attack of the Clones.

Daniel Craig is back in the fitted tuxedo, Judi Dench returns as M, Javier Bardem is a new bad guy, and they are being directed by Sam Mendes, so Skyfall sounds very promising indeed.
Posted by Michael at 11:24 AM No comments:

The Wolverine, the sequel to the disappointing X-Men Origins: Wolverine, is scheduled to start filming next year.

James Mangold has been enlisted as director. I'm very excited about this. He directed two films I enjoyed very much, Walk The Line and 3:10 to Yuma.

Mangold's strength is characters, and Wolverine is more than just a set of claws and a killer squint. The new movie is set in Japan and will be heavily influenced, apparently, by the seminal comic book mini-series from writer Chris Claremont and artist Frank Miller. It will explore the samurai code, Yakuza, ninjas and lots more according to this post from SuperheroHype.com.

With the recent success of X-Men: First Class, which had a huge James Bond vibe in its 1960s setting, and now The Wolverine being set in Japan - "like a foreign language film" per Mangold - maybe they will take more chances with comic book movies and move away from the cookie cutter approach they've long been taking.