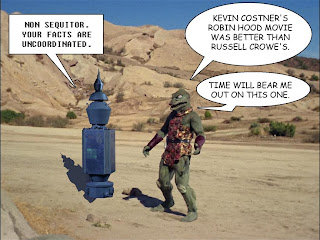 Star Trek is a Registered Trademark and Copyright 2011 by CBS Studios Inc. No infringement of those rights is intended with this parody. Screencaps from Trekcore.com.
Posted by Michael at 11:22 PM 1 comment:

Now most of these movies are iconic films in the genre, but you'd never guess it from these weird ass graphics. It's one thing to use Campbell's Soup cans in the Army of Darkness poster. We get it, foreign ad agency guy: the dude who plays Ash has the same last name as the "Andy Warhol soup." Fun-nee.

The Ghostbusters poster is six kinds of fucked up. What the HELL is that thing supposed to be, a jester?

The Gremlins poster looks like a cheap supermarket greeting card.

King Kong has a shark in one hand, a snake wrapped around the other, and one foot on the Titantic, but at least he's all ferocious and shit.

In the Empire Strikes Back poster, Yoda looks like he's had the contents of six vacuum cleaners dumped on his head, which is the correct look for Yoda in the PREQUELS but certainly not in Empire.

Vulture at NYmag.com has this great clip from the new Sarah Michelle Geller series Ringer.

Now if you recall, old Hitchcock movies like North by Northwest had obvious process work, where you could plainly tell that an actor was in the studio and not on location. Same for many of the early James Bond movies where Connery was in a nice cozy English studio for the close ups of him driving his Aston Martins and such.

We see a speedboat in the clip's opening and closing moments, then they cut to Sarah, playing identical twin characters on-board. The problem is that it is OBVIOUS this was shot in a studio. Did they even TRY to match the on location lighting?

If this clip is any indication, the special effects budget is about the same as a Starbucks' vente.
Posted by Michael at 12:13 PM No comments:

Working For A Living 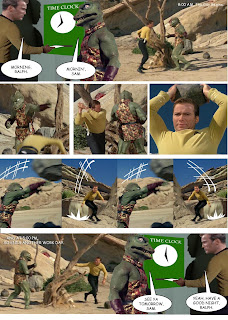 (With apologies to Chuck Jones.)

Star Trek is a Registered Trademark and Copyright 2011 by CBS Studios, Inc. No infringement of those rights is intended with this parody. Screencaps from Trekcore.com.
Posted by Michael at 11:46 PM No comments:

It HAD To Happen Sooner Or Later

Mainstream movies of the last several years seem to be having more explicit sex scenes; films like Ken Park, 9 Songs, Shortbus, The Brown Bunny, Lust, Caution, Antichrist, and Blue Valentine dip a toe, or other body part, into territory usually reserved for adult films (especially those that feature actual sex and not just the simulated variety).

File this under, "If I had a million bucks just lying around doing nothin'."

Sideshow Toys is offering an amazing Superman figure, based on the likeness of THE Man of Steel, the late Christopher Reeve.

The costume is spot on -- when costume designer Yvonne Blake adapted the blue and red togs from the comics to the real world, she nailed it (compare this version to the costume interpretation in the new Zack Snyder film - guess which one will be remembered the longest). The figure's body is incredible, with just the right amount of musculature to emulate/duplicate the physique that Reeve worked so hard to create (no padded-muscle-suit wearer he).

The range of motion is terrific, based on the gallery pics. The figure looks very life-like in the poses featured.

The one slight flaw is in the figure's expression. The sculptors did an astonishing job, but something about the eyes is not right. Compare this to Hot Toys work on a similar Michael Keaton-Batman figure, wear they got it 110% right.
Posted by Michael at 12:31 PM No comments:

The (Animated) Adventures of Jonny Quest

Jonny Quest, which ran for only one season in 1964, is one of the greatest animated adventure series ever made.

George Lucas must have seen this series as a geeky kid starting film school, as Jonny's adventures crossing the globe, traveling to exotic lands and encountering "scum and villainy*" (often with a supernatural bent) feel like mini-Indiana Jones tales.

I bring up this beloved series because an enterprising guy named Roger Evans has recreated the opening titles of Jonny Quest with stop-motion animated figures. It's a hoot and a half, and a real work of love. Evans does nearly shot for shot recreations, with some tweaking here and there (e.g., the Quest jet design). Here's the original article at io9.com.

And the JQ theme by Hoyt Curtain is still one of the greatest pieces of music ever composed for TV!

*yes, I know that's from Star Wars not Indy!

Posted by Michael at 9:53 AM No comments: