Two great things that boldly go together?  Well, apparently someone thought so, which is why we get this Twizzlers candy ad with a Star Trek TOS Enterprise and theme.

A funny thing, though, is they pattern the "warp effect" after the one used in Star Trek: The Motion Picture, not the Original Series, which uses the refit Enterprise and has a different musical theme.  But it works better in the context of the commercial (and it's another way to utilize more Twizzlers in the mix), so we'll let it slide.

Oh, well, it's still fun, with some great visuals.  And Twizzlers are still a sweet treat.


Posted by Michael at 7:26 PM No comments: Links to this post

My brother M sent me this pic.  It's from an old notebook* of mine from 1982.  Yup, that's a epic Star Trek Federation versus Klingons battle that I drew/doodled.

Can't recall who won, though (hopefully, the good guys). 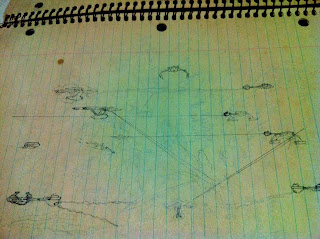 * Yes, kids, before blogs and the Interwebs and tablets and lasers you had to draw shit in spiral-bound school notebooks!
Posted by Michael at 6:35 PM No comments: Links to this post

Bananas: A New "Canvas" For Art

Japanese “banana engraver” Keisuke Yamada once again shows that any material can be used in the creation of art.  Even delicious potassium-rich bananas.

Check out his great takes on Homer Simpson, Darth Vader, Marge Simpson, the Alien from Alien, and others at Comics Alliance.
Posted by Michael at 9:16 PM No comments: Links to this post

Marvel Comics Shined In The 1980s

In the early 1980s, it was a good time to be a comic book reader.  There was a true renaissance going on in those four-color pages and Marvel Comics was at the center of it.  Under the direction of Marvel editor in chief Jim Shooter, writers and artists like Chris Claremont and John Byrne on Uncanny X-Men; Frank Miller working as writer and penciller (then later as breakdown artist for penciller/finisher Klaus Janson) on Daredevil; and Walter Simonson breathed new life into Asgardian mythology in penciling and writing The Mighty Thor.

These creators, and others with similar passions on other titles, breathed new life into characters that were nearing the end of their second decade of publishing.  Some titles, like X-Men (which had been featuring reprints of earlier tales) and Daredevil were close to being canceled before these young creators took hold of them and revitalized them for a new generation of readers.

A wonderful blog called Marvel Comics Of The 1980s celebrates that decade of creativity, including those heady early 80s years spotlighting not only the titles and talents listed above, but also gems like Doug Moench and Bill Sienkiewicz's acclaimed run on Moon Knight; David Michelinie, Bob Layton and John Romita Jr.'s seminal Iron Man stories (many facets of which were used in the recent Iron Man big screen movies); and John Byrne's epic run on Fantastic Four, widely viewed as the best run on that title since the 100+ issues from series creators Stan Lee and Jack Kirby.
Posted by Michael at 8:43 PM No comments: Links to this post

Ever watch the 2011 Green Lantern movie they made with Ryan Reynolds?  They gave it a huge budget.  Reynolds was certainly a likeable comedic actor.  And they tapped Martin Campbell - who directed the incredible James Bond flick Casino Royale - to helm the film.

The result: total wackness.  Just a dull, boring movie.  Nothing memorable about it, except how unmemorable it was.

Filmation Animation did a Green Lantern cartoon series in 1967.  It was much more fun, faithful to the comic books, and exciting than the big budget movie ever was.  Check out this episode from YouTube.  And yes, the baddie is named Evil Star!

Posted by Michael at 8:06 PM No comments: Links to this post

Check it out here.
Posted by Michael at 5:44 PM No comments: Links to this post

Spider-Man has faced his share of supervillains both in the 4-color comic book pages and on the silver screen. Green Goblin.  Doctor Octopus.  Sandman.  Venom.  The Lizard.

With Amazing Spider-Man 2 due in theaters in 2014, the villainous Electro will be added to the list.

One baddie we hope will NEVER see the big screen is Kraven The Hunter.  Kraven has simply the WORST costume design probably ever.  He wears an open vest with a lion's head - the big cat's eyes are where Krav's nipples would be (more on this later).  He also wears leopard spotted tights (Leopard.  Spotted.  Tights.) and strappy sandals.  Top this all off with a mustache that makes the Village People insanely jealous, and you have the worst-dressed spider-villain of all time.

Don't believe me, check out this pic:

Oh, and his "eye-nipples" shoot out some kinda jungle date-rape drug or sleeping gas (see panel 4, below).

Art by John Byrne and Dave Hunt, sourced from Grantbridge Street & Other Misadventures. Spider-Man and all characters shown are Copyright by Marvel Comics.

Posted by Michael at 9:23 PM No comments: Links to this post

Hanna-Barbera produced a nifty adventure cartoon in the 1960s called Space Ghost. It ran in syndication for a number of years in the 70s which is when I eventually caught it.

Space Ghost was designed by now-legendary comic book artist Alex Toth.  I found these early Space Ghost designs at a blog called Rip Jaggers Dojo. It's always interesting to me to see an artist's design process (that early sketch would have been more cumbersome to animate).  That first sketch with the boots and the underwear on the outside would have made Space Ghost just another standard superhero costume knockoff.

Mr. Toth's overall creedo of "less is more" prevailed and he nailed it with his amazing final minimalist Space Ghost costume design (among other refinements, no boots, no undies on the outside).
Posted by Michael at 6:30 PM No comments: Links to this post

Whether you were an avid toy collector or just liked to keep a Data or Geordi action figure sitting atop your desk at work, or a phaser in the drawer to vaporize trespassers to your work station, the fine folks at Galoob Toys sought to please all those folks with some great toys.

The amazing site Trekcore - which this site is forever indebted to for their screencaps of every ST iteration - has a great three-part series looking at the Galoob/ST: TNG connection. It's a must read.

Trekcore's Part 1 of their Galoob retrospective.
Posted by Michael at 12:17 PM No comments: Links to this post

Beam Me Up, Flipper

Instead of getting into an accident and getting $6 mil worth of bionics, Josh instead passed through some kind of weird energy field in space and came back with the ability to understand dolphin math (and hear weird computer sounds in the process)!

Yes, apparently Flipper and his buds use sine, cosine and fractions just as much as they gulp down fish treats.

io9 has a terrific clip of these proceedings.  Just wait til you get to the end for the wacked out math stuff.
Posted by Michael at 9:32 AM No comments: Links to this post