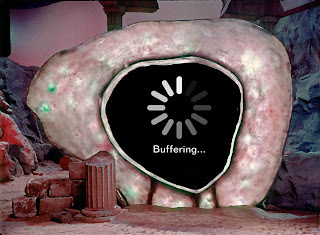 Star Trek is a Registered Trademark and Copyright 2020 CBS Studios Inc. All Rights Reserved. No infringement of those rights is implied with this parody.

Posted by Michael at 5:52 PM No comments:

Space: 1999 episode "The Taybor" Features the Worst Alien Hairstyle in the Universe

This cock was a crock. The episode "The Taybor" of Space: 1999 featured, hands down, the lamest alien menace with the WORST hairstyle in all of sci fi: he looked like a cockatoo.

So in honor of this load of space garbage that even Quark the space sanitation guy (that is a 70s reference, kids, not the Quark from Star Trek: Deep Space Nine) would not take out, here is Cockatoo magazine's latest issue. Also their first and only! Collection it all! 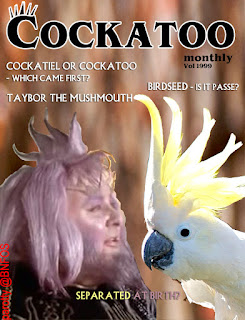 Posted by Michael at 5:07 PM No comments:

Hoarders of the Last Toilet Paper 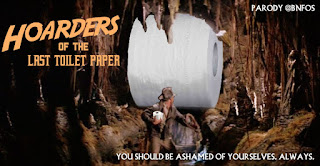 Just after President Trump declared a National Emergency at the end of last week due to the spread of the coronavirus, American shoppers decided to LOSE THEIR GODDAMN MINDS and go panic shopping, stocking up on - or more precisely hoarding - toilet paper, bottled water, medicines, masks, and more.

The human race is doomed.
Posted by Michael at 9:46 AM No comments:

I used to watch the classic sci-fi TV series Space: 1999 as a kid and I always thought it was more than a bit slow: it was leisurely paced, compared to say Star Trek, episodes were often filmed with heavy shadows on the sets, and lead actor Martin Landau whispered his dialogue when he wasn't shouting it.

But I have had the pleasure of re-watching the episodes online with a group of like-minded folks and they are often a laff riot!

Take this episode, for example: 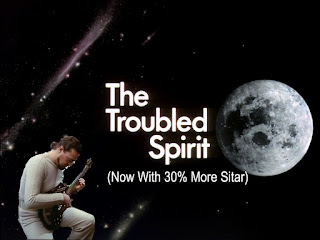 The moonbase crew, most of them anyway, sit down for an evening of sitar music (why the sitar? why not, said the producers). While the man-bunned electric sitar player strums his heart out, a small group of Alphans just happen to hold a seance in the botany lab -- that's right, they are trying to "make contact" with the plants! Oh, the '70s was full of really far out ideas. Well of course things go terribly wrong in short order, people start seeing a weird apparition, and Alphans start dying.

The man with the plant plan is Italian doctor Dan Mateo, or should-a I say-a "Doctor-a Dan-a Mateo". Yes, kids, he's-a one-a those-a Italian actors who put-a "a" at the end-a most-a his words-a. (I think I might have broken the "a" on my keyboard. Mama Mia!)


This episode is tailor made for people who like to riff on (with love, of course) the movies or TV shows they loved as a kid, with Dr. Chef Boyardee, the psychic plant seance, burn monster apparitions, Barry Morse's antler like sideburns, and Martin Landau's "I'd rather be back on Mission: Impossible" acting choices. 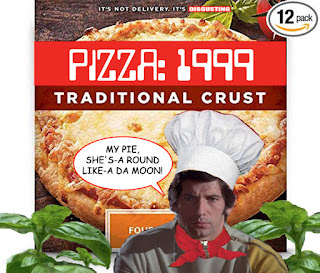 Christmas Comes To Pac Land, and Brings Nightmares For Us All

I just watched the execrable "Christmas Comes To Pac-Land" Pac-Man cartoon special from 1982. I took a bullet for you Internet with this one. We're talking full metal jacket.

When Santa first appears his sleigh crashes and when Pac Man and his goofy friends find him the animators drew Santa all sprawled out as if he was modeling a Playgirl centerfold! Don't believe me...LOOK AT THE IMAGE BELOW! (Yes, I "took away" his pants to make the gag more obvious, but come on!)

To cleanse myself of this hideous special, I made up the Santafold for Playelf magazine. You are welcome, Internet! 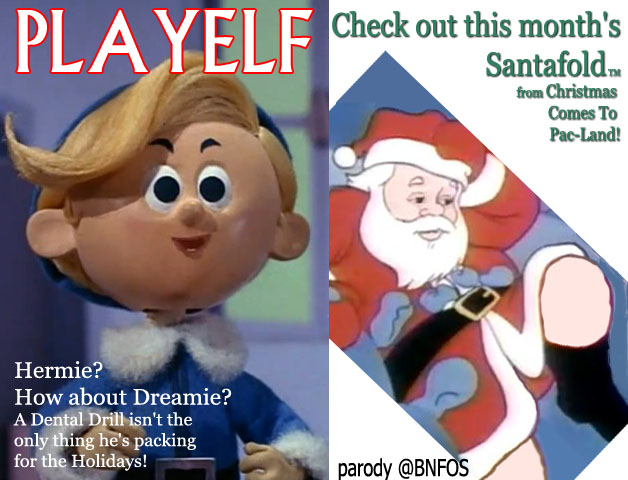 Posted by Michael at 6:57 PM No comments:

Are Baby Yoda and the IKEA Monkey the Same Thing?

Posted by Michael at 6:48 PM No comments: