Whichever way you slice it, I watched the pilot episode of this spinoff from the Marvel Film Universe twice now.  My review: (shrugs shoulders).

It's not horrible, but it was certainly not in the Realm of Greatness that one would expect from a property that has such an amazing pedigree: Buffy/Firefly/Avengers movie god Joss Whedon directed the thing; Joss Whedon co-wrote it; acclaimed comic book writer/veteran tv writer Jeph Loeb is an executive producer; and it's based on classic comic books by Stan Lee, Jack Kirby and Jim Steranko.

With all that going for it, it was merely okay.  And that is not okay.

In fact, The Hollywood Reporter enlisted Steranko to review the series for them.  He pretty much nailed it on the head.

Some highlights: "No menace, no tension."  Too many storylines, therefore "who in hell am I supposed to root for?"  "(Jeph) Loeb categorized the series as "SHIELD meets The X-Files." Great premise, but barely in evidence."  And "SHIELD needs to be much tougher, much stranger, much edgier to reach its potential!"

When I was watching Agents of SHIELD, I found my thoughts drifting off to the new Sleepy Hollow series.  YIKES!
Posted by Michael at 6:46 PM No comments:

Re-runs of The Six Million Dollar Man are on right now.  I loved this show as a kid.

One thing: HE'S GOT A MUSTACHE!

Yup, stone cold Steve Austin has a 'stache.  And it's a creepy looking thing: with Lee Major's patented squint, it makes Steve look smarmy, not suave (Tom Selleck's mighty 'stache has nothing to fear).  See for yourself, thanks to YouTube.

It's probably bionic too. Or perhaps it's made from Bigfoot clippings.  Only Steve Austin's barber (and/or Dr. Rudy Wells) knows for sure.
Posted by Michael at 11:01 PM No comments:

"It looks like the bridge of the Starship Enterprise."

How many times have we seen that quote in a news item before?  Well, it's time to roll it out once again, according to this article in the UK's Daily Mail.

It appears that not only is Keith Alexander, the current head of the National Security Agency, a Star Trek fan, but a Star Trek fan who likes to work in an authentic Trek atmosphere (and we're not talking a Class M  planet).

When Alexander headed the US Army's Intelligence and Security Command, he apparently had the unit's workplace modeled after, yes, the "bridge of the Starship Enterprise" complete with a center command chair, a la Kirk and Picard, and a large main monitor screen on the front wall.

Pretty nifty, but how much of the taxpayer's dime was siphoned for this fantasy workplace.  And, with all that chrome, it also could double as a Ken Adam-designed James Bond villain's lair.
Posted by Michael at 6:09 PM No comments:

If you're hungry and out and around Organia on Labor Day, make sure you stop at Ayelborne's for the best in out of this world BBQ.  Tell 'em Bad News From Outer Space sent ya. 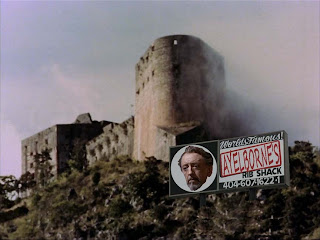 Star Trek is Copyright 2013 and a Registered Trademark of CBS Studios, Inc. No infringement of those rights is implied with this parody.  Screencaps from Trekcore.com.