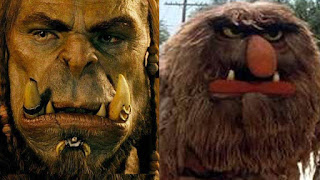 With apologies to the millions of faithful Warcraft gamers, I just could NOT take this movie seriously. A bunch of overly muscled and very toothy action figures (called orcs) seek to leave their dying home planet Draenor for a time share in the much nicer other-dimensional world of Azeroth. One of the lower order orcs, Durotan, begins to wonder if this is a good idea, as the reason their planet looks like Detroit after the bomb is because their leader Gul'dan practices a nasty brand of magic, called covfefe, also known as the Fel, which consumes everything around it, like Black Friday shoppers stampeding into Wal-Mart.

Less than five minutes into this eyesore, all I could see whenever one of the orcs spoke is Sweetums from the Muppets BECAUSE ALL THE ORCS LOOK LIKE HIM. Every orc with their big lower canines sounds like they have a speech impediment. They also look like He-Man action figures brought to life, with their ridiculously muscled torsos which should make them collapse into their chests like a personal black hole, or at the very least falling over all the time, especially with the comically large weapons they brandish.

This is a bad, bad, very terrible movie; the story is thin and paint by numbers, with characters who are silly when they are not totally forgettable.  Special shout out to Ben Foster (great in 3:10 to Yuma) who is horribly miscast as a great wizard (here called mages, which is a word they OVERUSE by about a thousand times). There are some actors who only should play contemporary characters (Richard Gere as Lancelot in First Knight, anyone?), when they do period or fantasy pieces they stick out like a sore thumb. I expected so much more from directer/co-writer Duncan Jones (Moon, Source Code).

This movie is proof that not everything needs a live action/photo-real adaptation.

Avoid at all costs, unless you have a case of beer, some robot puppets lying around, and a wish to put on a Mystery Science Theater 3000 home edition in your living room.

Warcraft image and Muppets image copyright 2018 by their respective rights holders. No infringement of those rights is intended with this parody review.

One of legendary author Ray Bradbury's seminal novels is finally coming to television. Or rather, not TV but HBO.

Fahrenheit 451, about a near-future society where censorship is everything and book burnings are conducted by the fire department under orders by the fascist government, is being adapted as a film by HBO; they selected Ramin Bahrani to write and direct. As he will also produce the movie, this must be a passion project for Mr. Bahrani. Starring are Michael B. Jordan (Creed, Chronicle, the upcoming Black Panter) as fireman Montag and Michael Shannon (The Shape of Water, Man of Steel) as his nemesis Capt. Beatty.

Click this link to CINEMA BLEND to see the first teaser trailer.
Posted by Michael at 8:59 AM No comments:

Back in 2012 Entertainment Weekly held a reunion for ET: The Extraterrestrial, the magical 1982 science fiction film, reuniting director Steven Spielberg with now-adult stars Henry Thomas and Drew Barrymore. It includes a rare behind the scenes moment where Spielberg is discussing the movie's final scene with a then-10 year old Thomas.

Spielberg could give a master class in directing child actors (or even adult actors). Here is the link to the EW post.

Posted by Michael at 8:51 AM No comments:

Let us start 2018 by looking back at "TV Show Endings That People Still Don't Understand" (from LOOPER).

This article includes series finales which confused (St. Elsewhere), confounded (The Sopranos), angered (Battlestar Galactica), and delighted (King of the Hill) us.