"X-Men: Days of Future Past" Teaser

On May 23, 2014, the X-Men return to the big screen in "X-Men: Days Of Future Past" an adaptation of one of the best storylines in X-Men history.

Led by the seemingly ageless Hugh Jackman - donning the indestructible claws of Wolverine - this latest movie is practically bursting with on-screen talent.  Returnees from X-Men: First Class include James McAvoy, Michael Fassbender, Jennifer Lawrence and Nicholas Hoult.  They star along with veteran X-franchise actors Ian McKellan, Patrick Stewart, Halley Berry, Ellen Page and Shawn Ashmore.  According to Screencrush, we'll be introduced to new mutants including fan-favorite Bishop, Sunspot and Blink.  Oh, and some guy from some little-seen show called Game of Thrones is also in the mix: Peter Dinklage.

The movie probably needs to run about 3 hours - we're talking Lord Of The Rings runtime - to cover all those amazing actors and all those storylines.
Posted by Michael at 7:47 PM No comments: Links to this post

The Thing With Two Heads - A Movie With Half A Brain


Yesterday we had a Man With Two Brains.

Today, naturally, we get a man with two heads, or more specifically, The Thing With Two Heads.   Yup, this is what happens when you combine an Oscar-winning actor (Ray Milland, for The Lost Weekend), a former NFL football star (Rosey Grier) and a very goofy blaxspoitation script.

Or as the tag at the top of the poster so succinctly puts it, "They transplanted a WHITE BIGOT'S HEAD onto a SOUL BROTHER'S BODY!" 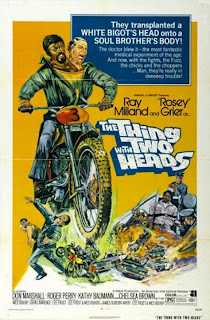 Posted by Michael at 8:02 PM No comments: Links to this post

Steve Martin Brightens Your Halloween With His Two Brains

Because Halloween is just around the corner (or should that be "coroner?" Bazinga!), it never hurts to have an extra brain or two handy for the candy jar.

Here's a great bit from the Steve Martin classic The Man With Two Brains, with the old subdural hematoma versus epidural hematoma quandry:

Posted by Michael at 9:58 PM No comments: Links to this post

You like Taco Bell?  Hey, who doesn't, especially since some marketing genius decided they should make taco shells out of Doritos chip flavors like Cool Ranch and the ubiquitous Nacho Cheese.  Brilliant!

I predict we are about seven years before Taco Bell, and fast food joints in general, goes full on Soylent Green on us.


And, as usual, the American public will just shrug and order fries on the side.
Posted by Michael at 9:31 AM No comments: Links to this post

So uber-animation god Bruce Timm and Zack Snyder, director of this summer's Man of Steel, put together an amazing tribute video, which can be found at Entertainment Weekly's site.  (I originally got wind of this at Comics Alliance.)

So many decades, so many great artists; Additionally, it's nice they also included the most famous TV and film versions in there too.

Posted by Michael at 9:18 PM No comments: Links to this post

Music Beyond The Stars

Ever see The Seven Samurai In Space?  You may remember it as Battle Beyond The Stars, the Roger Corman-produced scifi movie with John Boy Walton (aka Richard Thomas).

It's one of Corman's better releases, with lots of cool aliens, fun spaceship designs (hey, a starship with boobs!) and a nifty early effort from composer James Horner.  (Trivia fuctoid: James Cameron toiled on the movie first as a lowly model maker, but was quickly promoted to production designer/art director and visual effects supervisor.  Plus, Cameron would later select Horner to score his own films, such as, Aliens, Titanic and Avatar.)


Posted by Michael at 9:24 PM No comments: Links to this post 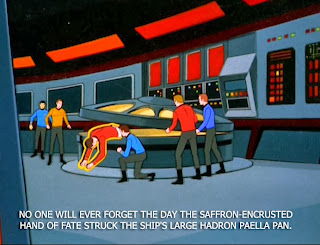 Star Trek is Copyright 2013 and a Registered Trademark of CBS Studios, Inc. No infringement of those rights is implied with this parody.  Screencaps from Trekcore.com.
Posted by Michael at 7:43 PM No comments: Links to this post

The Simpson's annual "Treehouse of Horror" (the 24th edition!) is airing on Sunday, October 6, and they have enlisted celebrated filmmaker Guillermo del Toro to create the opening credits sequence.  Del Toro is a true, dyed-in-the-wool genre fan as he includes a wide range of references, everything from Universal Studios' classic 1930s horror creatures, Ray Harryhausen and Hitchcock, Godzilla, the Shining and even Blade II (which he directed - in fact, all of GdT's films get the animated nod), to Bradbury, Poe, Lovecraft and Rod Serling, for starters.

The helpful folks at Screen Crush put together this helpful primer so we don't miss any of del Toro's ghoulish fun.
Posted by Michael at 5:45 PM No comments: Links to this post