A Great Movie and a Movie That Grates

I recently had the opportunity to sit through a double-bill of two blockbuster movies released in theaters this year. Both had large budgets, veteran film-making crews, and audiences familiar with the tales. But where one was a magical journey involving a makeshift family, the other was a loud, ugly mess. The movies I’m speaking of are The Last Airbender and Toy Story 3 (guess which was the ugly mess).

It was very informative to watch these two films back to back. Where Airbender got everything wrong, Toy Story 3 got it right. The Toy Story movies have always benefited from the lead voices of Tom Hanks and Tim Allen, as Cowboy Sheriff Woody and spacey spaceman Buzz Lightyear, respectively. Unlike the casting decisions of other animated movies, Hanks and Allen were not cast simply for their marquee value, but because they were perfect for these characters. The voice actors for all the other toy characters are spot on as well. In Toy Story 3, I was surprised it was Ned Beatty breathing life into Lotso, the huggable bear with less than huggable intentions, but he was the right choice.

Airbender, which is based on a popular Nickolodeon cartoon series, is set in mystical countries with a heavy Asian bent, but all the main (child) characters are Caucasian. In the beginning, we see an Eskimo-like village where all the elderly people appear to be Inuit, but the adolescent lead actors – a pair of which come from this very same village – are all white kids who looked like they took a bus from the local galleria. The characters in the original cartoon are all Asian, but you can see the studio execs saying, “We don’t feel Asian actors would carry the movie in most major markets, so all the good kids need to be Caucasian, mmm-kay?” It’s at this point that writer/director/producer M. Night Shyamalan should have quickly removed himself from the movie.

Toy Story 3 tells a simple enough story: the little boy Andy is now grown up and heading off to college. What will happen to all his old toys? Will they be disposed of with the garbage, tossed in an old box in the family attic, or perhaps given away to a kid or kids who will play with them? Airbender tells us there are four nations who control the elements of fire, water, earth and air. We see each nation has helpfully color-coded itself so we can tell them apart from one another (the fire nation wears red, the water nation blue, etc). There is the mystical chosen one who can control all four elements, so everyone wants this dude. The trouble is they found a martial artist for the lead (Noah Ringer), instead of an actor. This kid is terrible (which shows you how good Haley Joel Osment was in The Sixth Sense under the guidance of the same filmmaker, Shyamalan).

I’m just going to say it: The Last Airbender is a stupid movie. If the lead kids were terribly interesting actors that might have helped to elevate the thing, but the fact is they were all flat and unappealing. They all looked like they would comfortably fit on any Disney Channel series. Jackson Rathbone, who played Sokka, the young Han Solo/Madmartigan-wannabe NEVER blinked his eyes. It was unnerving at first, then annoying, then just totally silly (it was suggested a drinking game be centered on his unblinking peepers). I never once believed in any of these characters. I was watching actors act (unlike, say, in the Harry Potter series where all the characters are so vividly brought to life).

The scenes of characters “bending” or manipulating the elements were laughable. Apparently to control the elements you have to do a ton of martial arts flourishes – basically a lot of shadow boxing. With all the different styles of martial arts out there, you’d think that perhaps each element would have its own style: something extremely fluid for water, short quick movements for fire, and something “heavy” (or at least less fluid) for earth. This was not the case as each bender seemed to be doing the same flourishes for their respective element.

Toy Story 3 showed us that by keeping the story and characters first and foremost on everyone’s mind, the third outing for a franchise need not be a dull retread. I liked that it was a simple story – apparently one idea for TS3 was that the toys go to China or Hong Kong to save a malfunctioning Buzz. That sounds like something any studio would do, but Pixar wisely jettisoned that idea and kept things close to home (literally and figuratively). They kept the main group of Andy’s toys, but added a few new key characters in Lotso and Ken (Michael Keaton, doing an outstanding job as the lone male action figure in a line of girl’s toys). They even managed toss in an homage to Cool Hand Luke's infamous "spends a night in the box" speech!

That’s not to say Toy Story is all talk and emotions. There are some great action sequences, including a conveyor belt scene that was top notch in terms of pacing, but it also packed an emotional punch.

The Last Airbender left me annoyed and angry that I’d wasted 2 hours watching another failed big budget studio fantasy effort. Toy Story 3 made me laugh and smile and even brought a tear to my eyes at the end, so this double bill wasn’t all bad.
Posted by Michael at 3:07 PM 2 comments: Links to this post

Giving Thanks to All Our Readers 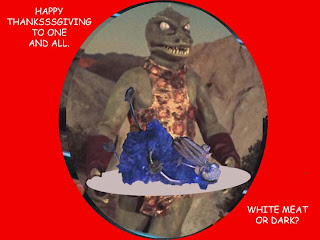 Disclaimer: Star Trek is Copyright 2010 and a Registered Trademark of CBS Studios, Inc. No infringement of those rights is implied. Screencaps from Trekcore.com.
Posted by Michael at 11:41 AM No comments: Links to this post

A blond-haired "ninja" gets into trouble in Redneck Town, USA and quickly goes on the lam. (Someone explain to me how going on the run and not wanting to fight equals “vengeance?”)

How do we know this guy is a ninja? From the contents of his nap sack, of course, which includes throwing stars, some rope, a thing that looks like a flute, some more throwing stars, oh, and two books on ninjas and ninjutsu. The fact that they are two PAPERBACK books clues us in his training was first rate.

This movie could easily have been titled, “Ninja Pamphlet” as it constantly flashes back to our ninja Chris Mason’s (Craig Boyett, who looks more like John Tesh than Chuck Norris) training on the beach by some white bearded sensei (Stephen K. Hayes) who drones on about important martial arts messages such as the way of the ninja, the concept of yin and yang, and the best dim sum joints in town. He’s like a very mellow Tony Robbins.

The town locals are all KKK-carrying racist goofballs, who are often hilariously over-dubbed in crowd scenes (seriously, I've never heard "Git 'em!" so many times in one movie). Led by a corrupt sheriff and his son, Jesse the deputy (David Paul Lord), the rednecks kill a young black student Mike Washington (Frederick Phillips) who is friends with Sam (Janet Pawlak) the white idealistic town cutie who dreams of better things than being a KKK bride to Jesse. The triple Ks frame ninja Chris who tried to stop Mike's beatdown, so he dons his cross trainers and, with Sam in tow, goes running in the woods. And they run some more. And run a little more. And, yes, even some more. I think the woods put up the majority of funding for this flick.

I have to say this: Janet Pawlak, who is a cutie despite her nearly-up-to-her-armpits 80s jeans, runs with all the grace of a coked up orangutan. Seriously, it’s distracting. When she briefly clambers over a tree branch, it was one of the most graceless movements I have ever witnessed a human being perform. Maybe it's the jeans' fault.

The fight scenes are, without a doubt, some of the most inept I have ever witnessed. Lord and Boyett may have black belts but they have no idea of how to fight for the camera, and director Karl Armstrong doesn’t know the first thing about staging a movie fight. Also decent "chop socky" fight sound effects might have helped sell some of this mess, but those were also absent.

The judo flips in the old Charlie’s Angels series were much more convincing. Speaking of which, Boyett appears to have invented the shoulder roll (don't tell William Shatner or Robert Conrad -- two guys who had mastered that move -- about this) -- at least that's what you would think after watching him do that move eight or nine times in the movie, whether he is fighting or not. In fact, after he checks into his motel early in the movie, he goes out for a little exercise and meditation in the park and the first thing he does is a shoulder roll! For NO apparent reason!

Pretty much everyone in the cast is a non-actor. Boyett, here in his first and only movie credit, makes me long for the early days of Chuck Norris. Norris was never much of an actor either, but he at least had presence (and a cool beard). Boyett is beyond bland, and quite beardless.

"Bland" pretty much sums up this nutty ninja caper.

Now, the end credits had something I've never seen before. They credit the group of people at the KKK rally as "Ku Klux Klan members," which is fine, but a group of black people who show up to confront the Klan are credited under the heading, "Blacks." OMG, right?
Posted by Michael at 2:35 PM No comments: Links to this post