Happy Halloween Weekend, You Things From Another World, You 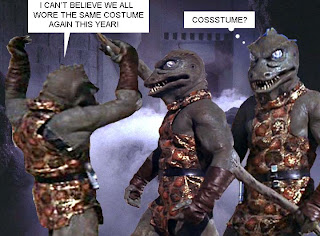 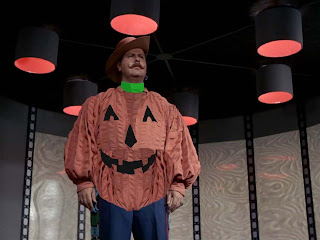 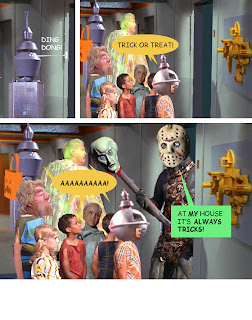 The above pics are from my previous review of the trick or treat episode "Catspaw" from Star Trek TOS.
Posted by Michael at 9:28 PM No comments:

Go Tell It On The Mountain

Recently, I sat down to watch a movie I knew nothing about, other than it starred Clint Eastwood and featured mountain climbing. The movie was The Eiger Sanction, and it was a pleasant surprise.

Eastwood, who also directed, played a college art history professor with the awesome name of Jonathan Hemlock. Unbeknownst to the college and the cute coeds who make googley eyes at the prof, Hemlock is also a government assassin who worked for the shadowy agency C2.

Hemlock is sent to “sanction” or terminate the people who killed one of the agency’s own. He realizes this is pointless, but accepts the work for the money which he uses to buy black market art pieces (hey, everybody got to have a hobby).

I wasn’t expecting the movie to have the “American James Bond” vibe that it did. Most of this was courtesy of Hemlock’s creepy agency boss who goes by the name, Mr. Dragon, played by Thayer David. Dragon is an albino with white eyes and a need for his office to be bathed in red light, a spectrum which he can tolerate. Hemlock and Dragon’s exchanges bring to mind those of Bond and his boss M, but with a bit more venom, as Dragon is a real asshole (both characters know this). Dragon even has a nurse named Miss Cerberus, a combination of Nurse Ratchet and Young Frankenstein’s Frau Blucher, who changes his blood!

The movie, based on a popular novel by “Trevanian” (a European sounding pseudonym for American writer Rodney William Whitaker) is slower paced than contemporary action movies, or even James Bond movies of the time. However, the mountain climbing scenes were well done – no CGI or crappy process shots - with Eastwood and company actually climbing the mountain in Europe, as well as mountains at US locations seen earlier in the film in sequences showing Hemlock training for the Euro-climb.

George Kennedy was a treat as Hemlock's old pal and climbing trainer, Ben Bowman. Here he brings a bit of the fun and energy he had in his Academy Award-winning role in Cool Hand Luke.

The movie is a little on the longish side, it could easily have had 10 minutes trimmed off, but Eastwood was in top form, as were many of the lovely unclothed ladies featured in this R-rated film. And the film is topped off by a nice romantic John Williams score.

Does The Future-NRA Know About This?

The new Fox series Terra Nova is the most expensive show on tv, with an estimated budget of $4 million per episode. But there appears to be an area where they are skimping on the dineros: props.

Now, every sci fi series has had to take "found" objects, modify them, and turn them into futuristic props of some kind. The old Star Trek was famous for taking fancy silver salt shakers and, with some snazzy sound effects, turning them into Dr. McCoy's 23rd century surgical tools.

But Terra Nova, according to this piece at io9.com, apparently took some orange and blue plastic NERF toy guns and...just spray-painted them black to use as guns. They didn't use the NERF guns as the basis of a new cool future weapon, adding cool new parts to it, as the Han Solo weapon above was created; they just took something that was one color and painted it another.

For $4 mil per episode, I would have expected some original designs, manufactured just for the show (after all, in the storyline, the tech comes from 100 years in our future). But, seriously, spray-painted plastic NERF guns? That's something a movie with a $4,000 budget would pull.
Posted by Michael at 11:08 PM No comments:

Patroling The Highways And Byways In Style

Remember The Highwayman, the jaw-droppingly stupid 80s adventure series starring Sam J. (Flash Gordon) Jones and, in his inexplicable 15 minutes of fame, Australian weirdo Jacko as dudes who patrol the roads of the near-future in a big rig that just happens to covert into a helicopter? (Yeah, it was a Glen (Knight Rider) Larson production.)

Here's the $3 million luxury RV version, but instead of converting to a copter, they added a mini-bar. (from Yahoo News)

In this Marvel Films short at ComingSoon.net, we get to see just why Phil Coulson is an Agent of S.H.I.E.L.D.

Funny and cool at the same time. It will be included with the Captain America movie DVD out next week.
Posted by Michael at 11:39 AM No comments:

Here's the newest trailer for The Avengers movie, due out in May 2012 (via io9.com). 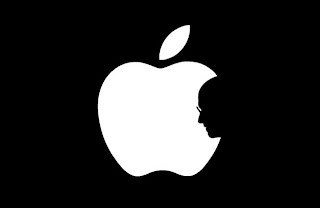 Apple Computer founder Steve Jobs passed away earlier this week at the age of 56. Mr. Jobs gave the world its first personal computers (the Apple II), popularized smartphones (the iPhone) and believed in a little computer animation company (Pixar) when others didn't.

The amazing logo above is the work of Hong Kong art student Jonathan Mak Long, which I found in this Yahoo News piece. I love it for its stark simplicity.
Posted by Michael at 6:32 PM No comments:

Labels: Things that came to mind

When I was a junior space cadet, I lived on the movies and tv series of the 1970s.

I feasted on everything from re-runs of Star Trek, Space: 1999 and UFO, first run episodes of Battlestar Galactica and Buck Rogers, to Ark II, Space Academy, Return to the Planet of the Apes (animated monkeys!), and, of course, Land of the Lost on Saturday mornings.

Trips to the movies included fare such as Message from Space ("Hey, walnuts!"), Alien and some movie called Star Wars.

Now, there's a blog that helps us re-live those special, polyester-clad days - it's called Space: 1970.

Do stop by, and tell 'em Bad News From Outer Space sent ya.
Posted by Michael at 11:41 PM No comments:

Alright, Terra Nova, you and me are gonna have a little chat. I just watched your two hour Fox Network pilot again, and you definitely do not have me hooked. SPOILERS AHEAD.

First of all, WHY do you want me to watch you, for what reason? It’s not the dinosaurs, which, I’m sorry, while they look like decent “Walking With Dinosaurs” caliber viz effects, they are definitely NOT “Jurassic Park”-level effects, which we as an audience are expecting. Seriously, it’s been 18 years since “Jurassic” premiered in theaters and Steven Spielberg is one of your producers. Couldn’t you just use the ILM software from back then?

Also, Spielberg apparently doesn’t want to use the same dinos from the Jurassic movies, so instead of everyone’s fave Tyrannosaurus Rex, we get their limp Cretaeous stand-ins Carnotaurs. In place of Velociraptors we get the goofy “Slashers” with their blade-tipped tails which are an entirely MADE UP species of dinosaur. I’m sorry, but you’re not simply taking liberties with animal traits/abilities (like the spitting dinos in JP), you’re just making shit up. Not cool.

Another Spielberg influence is apparently that we humans cannot be shown killing a dinosaur, even one that is trying its darnedest to slash/chew/eat/devour us. You can fire an A-Team episode's worth of ammo at the suckers but they will never fall -- "their hide is too tough" or some nonsense -- or even be scared off by the sound and muzzle flashes. This is a bunch of baloney.

No, Terra Nova, the real reason I don’t like you is the Shannon family. In the future of 2149 where the story began, with its dwindling resources and severely pollution-damaged earth, there is a two child per family limit. According to the pilot, Jim and Liz Shannon simply decided to have a third child, risking their entire family’s safety in the process. Well, they are indeed found out, and Papa Shannon is sent to prison for a spell. The Shannons knowingly broke the law in having a third kid and they hid her for three years before the Terra Nova project came along to save them all. If Terra Nova didn’t exist what kind of life could their youngest kid have in 2149 (talk about an “illegitimate child” - was she going to live her whole life in the house's airduct?).

It would have been better from a story standpoint if Liz Shannon got pregnant despite taking government-supplied contraceptives, so instead of Jim Shannon telling Commander Taylor they had a third child “because it seemed like the thing to do” which is a witless moron’s answer, he could have said something a bit more profound and sympathetic, e.g., “We did everything we were supposed to; we didn’t plan to have Zoe, but her spirit would not be denied.”

Mrs. Shannon apparently comes from some means, and the overall vibe is this family gets whatever it wants. They have a third child against the rules, hubbie breaks out of a maximum security prison (apparently due to a lot of money being put in people’s hands), Zoe their little girl is taken from wherever the hell she was being held for two years while Pops Shannon was in the joint, the family is reunited and gets to start all over again in the past. They come across as over-privileged people, and that’s not someone I’d like to root for each week.
Posted by Michael at 7:03 PM No comments: