Ain't It Cool News correspondent Quint has posted a really cool photo in his ongoing Behind The Scenes feature.

This time around the space time continuum was seriously messed with because a comic book icon meets a couple of scifi TV stars.  We're talking none other than Batman's Robin the Boy Wonder (Burt Ward) and Lost In Space's Will and Penny Robinson (Billy Mumy and Angela Cartwright).

It's truly awesome that all three are in their costumes (too bad the Batmobile and the Robot aren't also in the shot).  It's also funny that they are obviously on some studio backlot as there is a building behind them but a giant boulder is on the street in the shot with them.

Hollywood magic at its best. (from AintItCool.com)
Posted by Michael at 9:04 PM No comments: Links to this post

Animator and artist extraordinaire Dusty Abell has uploaded a Star Trek: TOS poster to his Deviant Art page that is nothing short of phenomenal.

The idea according to Abell was to feature some element from each of the original 79 episodes of Star Trek: The Original Series.  There's simply so much to love about this piece: the Enterprise has never looked better, the likenesses of the actors/characters - while being caricatures - is amazing, the setting itself (check out the Triskelion flooring!).  Also, Abell stated he put Lazarus on top of Vaal figuring he'd be falling off something sooner or later.  Priceless.

A poster seems too small for this artwork.  I wish I had a projector to shine this image up on a wall to stare at it all day!  (originally found on the John Byrne Forum)
Posted by Michael at 4:09 PM No comments: Links to this post

It was just announced that if you go to see The Hobbit: An Unexpected Journey in IMAX when it opens in December as a treat you will also get to see the first nine minutes of next summer's Star Trek Into Darkness.

It will be four years since the ST reboot/reimagining/rejiggering when the full movie finally bows in May, and the hype sure to come from the IMAX sneak peeks will get those dilithium crystals glowing white hot, which can only be a good thing.  (from The Wrap.com)
Posted by Michael at 1:55 PM No comments: Links to this post

Even Zombies Have A Heart

The instant classic Shaun of the Dead was advertised as a Rom-Zom-Com, ("Romantic Zombie Comedy").  The titular character had to go through the normal travails of a romantic comedy to save his sweetie during a zombie outbreak.

Warm Bodies is a new film from Jonathan Levine, the director of a great little movie called 50/50 (the comedy where Joseph Gordon-Levitt's character finds out he has cancer).  Unlike Shaun this is a true Rom-Zom-Com - a zombie actually falls in love with a human!

The zombie is played by talented Nicholas Hoult (last seen by me as Beast in X-Men: First Class; Hoult also did great work in About A Boy), and the girl is played by the lovely Teresa Palmer.

The first trailer for Warm Bodies is here, and it looks very promising. (Trailer found at Collider.com)

Posted by Michael at 10:53 PM No comments: Links to this post

World War Z. It was a best-selling book chronicling the aftermath of a worldwide zombie war.  Now it's a movie starring Brad Pitt and directed by Marc (Monster's Ball, Quantum of Solace) Forster.

This first trailer for World War Z looks...interesting.  For years we had the slow, shambling zombies popularized by George A. Romero's trilogy of Dead films, and continued in the current Walking Dead TV series.  After Danny Boyle's terrific 28 Days Later and Zack Snyder's remake of Dawn of the Dead, we also have the fast moving zombies.  Forster now gives us a third wrinkle, the zombie swarm: like a horde of ants or school of fish, with hundreds, even thousands, of zombies moving extremely fast.  (What's next, parkour zombies?)

I wonder if this is going to be a problem with the movie, as the human eye can quickly detect when something is not right with another human figure, which is a huge issue with CGI people in movies today.  CGI figures often come off as creepy, as in the Polar Express or Beowulf, or the too-quick movements of Spidey in the first Spider-Man film reading as false.

Another big issue is that the movie, at least from the trailer, does not appear to follow the novel.  The book was a thoughtful series of anecdotes that painted a picture of the devastating worldwide zombie epidemic done ten years after the war ended. The movie looks to be Brad Pitt Vs. The Zombies (and that's a title that would read better if it were Bruce Campbell Vs.The Zombies).

Guess we'll find out next summer.  (from IndieWire.com's The Playlist blog)

Posted by Michael at 10:54 PM No comments: Links to this post 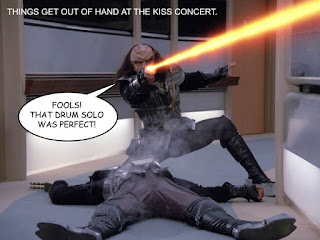 STAR TREK is a Registered Trademark and Copyright 2012 by CBS Studios Inc. No infringement of those rights is intended with this parody. Screencaps from Trekcore.com.
Posted by Michael at 6:40 PM No comments: Links to this post