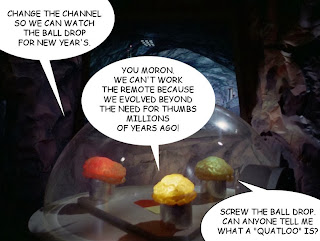 Star Trek is Copyright 2013 & 2014 and a Registered Trademark of CBS Studios, Inc. No infringement of those rights is intended with this parody. Screencaps from Trekcore.com.
Posted by Michael at 9:43 PM No comments:

A blogger named Frederick has a terrific fun blog called HELD OVER MOVIES where he puts up old newspaper ads for movies.

Check it out for a couple reasons: 1. the great rush of nostalgia at seeing ads for pics like Orca, The Spy Who Loved Me, Planet Of The Apes, chop-socky classic Exit The Dragon, Enter The Tiger and something called Superargo vs. Diabolicus, and 2. the thrill of seeing old-style poster designs and paintings (before Photoshopping everything became the norm).

Since Darren Aronofsky's new film Noah is coming out in 2014, this poster for In search of Noah's Ark seemed the perfect thing to post here. 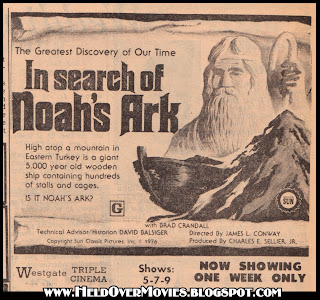 Move over, Mothra. Cram it, Cloverfield.  And pack it in you Pacific Rim kaijus. The first - and best - giant monster of them all it coming back to the big screen in May 2014.

We can only be talking about Godzilla.

This first teaseer trailer is phenomenal.  Serious, smart, great mood and atmosphere, incredibly realistic visual effects.  And, holy crap, that ROAR at the end is - to use a classic Marvel Comics cover blurb - "senses shattering!"

Here's the teaser from You Tube:

Posted by Michael at 7:55 PM No comments:

Here are three words on film posters that strike fear into movie-watchers everywhere: "and Richard Grieco."

Mr. Grieco has been coasting on his status as one of the 21 Jump Street TV brat pack dudes, but, come on now, that show ended over 20 years ago.  Grieco was only on it for one season, plus one season on his character's spinoff show.  Jump Street was nowhere near as influential or popular a show as, say, Miami Vice, so come on people, it's time to stop renting the crap Grieco makes.

Comics Alliance had this to say about "mockbuster" The Almighty Thor, which stars Patricia Velasquez, Kevin Nash "and Richard Grieco" - "Almighty Thor is nowhere near as good as you want a movie starring Richard Grieco as Loki and Big Daddy Cool Diesel Kevin Nash as Odin (with absolutely no effort made to hide his tattoos) to be, but it does feature dinosaurs and Thor with a machine gun."

Other flicks starring some folks "and Richard Grieco" include, A House Is Not A Home and Evil Breed: The Legend Of Samhain.
Posted by Michael at 10:10 PM No comments:

"I'm going to take this right foot...and I'm going to wop you on that side of your face.  And you want to know something...there's not a damn thing you're going to be able to do about it."

I imagine Billy Jack is having that conversation with St. Peter at the pearly gates.  Yes, you read that right, Billy Jack or rather his earthbound form of actor/writer/director Tom Laughlin has passed, on December 12 at age 82, from this reservation onto the next.

No one did Native American-US Army vet-turned-pacifist-action-hero like Laughlin.  He played the black hat-wearing, denim-clad Billy Jack in four films: The Born Losers (1967), Billy Jack (1971), The Trial of Billy Jack (1974) and Billy Jack Goes To Washington (1977).


As a kid, I loved the first two films in the series.  Laughlin had a likeable, genuine screen presence (although it's obvious when his double, Hapkido master and the movie's fight choreographer Bong-soo Han is being used).  Billy Jack wasn't a superhero, but man, could he open a can of whoop-ass on a bunch of dumb rednecks.

Community - A Look At Season Five

Community.  You love it.  You...can be indifferent to it.  I would say without a doubt that it was the most creative series on TV in its first three seasons (under creator and showrunner Dan Harmon), although, admittedly, it wasn't always the funniest.

After Harmon was fired for season four and other producers were brought on to guide the show, I lost interest, but watching the early episodes in syndication has got me wanting to once again sign up for classes at Greendale Community College.

Here is the trailer, via YouTube for Season Five, which features the return of Dan Harmon to the creative reins of the show.  While I am sad that Donald Glover is leaving the series (the relationship between his character Troy and Danny Pudi's Abed is the true heart of the series)  I cannot wait for the latest paintball episode.

Posted by Michael at 7:29 PM No comments:

Because the 21 Jump Street movie was such a wonderful, funny, raunchy surprise, here for your viewing pleasure is the restricted red band trailer for 22 Jump Street on YouTube:

Posted by Michael at 7:19 PM No comments:

The Christmas season brings to mind a few things:  snow, grandma getting run over by a reindeer, Rudolph specials, presents, and...Guy Fieri?

Well, thanks to the folks at Saturday Night Live you now can add the super-bleached host of "Diners, Drive-ins and Dives" to your holiday yulelog with their Guy Fieri Full Throttle Christmas Special.

More fun than the actual Guy Fieri himself, SNL's X-Mas special features the "human equivalent of the food (he) makes," with guests like Kid Rock, Criss Angel, Kimbo Slice, Mimi from "Drew Carey" and the dudes from Duck Dynasty.

Check out the insanity here, courtesy of Screen Crush.

Posted by Michael at 7:13 PM No comments: