Computer Generated Images or CGI are used in many movies today, not just the big budgeted summer blockbusters.

But nothing can take a viewer out of movie as quickly as bad CGI effects.  Some directors, like Christopher Nolan, like to film as much practically and only use CGI to round out a sequence, e.g. Inception's train barreling through a downtown Los Angeles street was accomplished with a real big rig truck with a train facade built around it; CGI was used for the trains wheels and the asphalt churned up by them.

Cracked.com has a fun article about "7 Amazing Movie Special Effects You Won't Believe Aren't CGI" with a look at some way cool non-CGI effects sequences from, among others, The Dark Knight Rises, Skyfall and the classic Tron.
Posted by Michael at 3:41 PM No comments:

What A Logical Savings

This old Atlantic Bank commercial from the late 1970s featuring none other than Leonard Nimoy is so earnest, that is looks like something that would have appeared in the movie Galaxy Quest.

By Grabthar's Hammer - and Vulcan's moonless sky - what a savings!

William Shatner shows why he's a truly unstoppable force in this fun ad for the new Star Trek Video Game.

An old friend of this blog helps Mr. Shatner with the game.  Don't worry, this commercial is "mer-ci-ful...and quick."

From the folks at AintItCool.com.
Posted by Michael at 10:31 PM No comments: 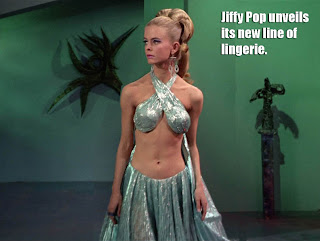 STAR TREK is a Registered Trademark and Copyright 2013 by CBS Studios, Inc. No infringement of those rights is intended with this parody.  Screencaps from TREKCORE.COM. The lovely Droxine is Copyright by her father, Plasus the High Advisor of Ardana's Ruling Council, who wants you and every young space yahoo to know that he is as brave with mortay as you are with a phaser.  So there.

Posted by Michael at 6:12 PM No comments:

Avengers Assemble For The Harlem Shake!

The latest Internet meme of the "Harlem Shake" has been filling up YouTube and the interwebs with its many zany dance (if you can call it that) interpretations.

I dig this one by YouTuber SpastikChuwawa with tiny Lego Avengers:

Posted by Michael at 6:46 PM No comments: