Some dude put a real laser into a Star Trek phaser, complete with the phaser sound effects.

Yes, this does indeed rawk.

from blastr.com
Posted by Michael at 10:48 AM No comments:

A Salute to The Monster Squad at 25

If you're a true lover of great genre movies of the 1980s - and hey, who isn't - then you will fondly remember the line above. It's from one of the coolest movies of 1987: The Monster Squad.

Much more fun than The Goonies, at least in my opinion, The Monster Squad's group of misfit kids were lead by the underrated Andre Gower, and took on half the Universal's Monster army of undead things, including the likes of Dracula (well acted by Duncan Regehr), the Mummy and the Gill Man (subbing for the more well known Creature From the Black Lagoon).

PopMatters has a nice write up of the movie.
Posted by Michael at 12:20 AM No comments:

Who Knows What Evil Lurks...

...In The Hearts Of This Year's Blockbuster Movies? 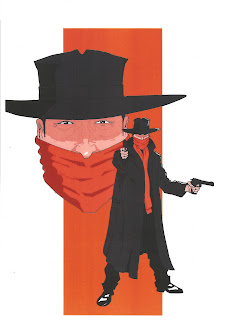 The Shadow may know, but even HE was severely disappointed by the recent dull, bloated non-event John Carter and, quite frankly, by The Hunger Games as well - while the latter featured a fine performance by lead Jennifer Lawrence, the movie's avoidance of its core story (children hunting and killing children for sport) left nothing to anchor her performance to. The Hunger Games leaves your mind by the time you get back to your car.

The Shadow hopes to watch the shit out of The Avengers and The Dark Knight Rises.

As for the other big-budget movies, remember, The Weed Of Crime Bears Bitter Fruit. And the Shadow carries a serious fucking Weedwhacker.


The Shadow is Copyright 2012 by its respective rights holder. No infringement of those rights is intended with this posting. Original artwork by Michael Fleming.
Posted by Michael at 8:49 PM No comments: