A Turkish Movie and A Gimp Walk Into a Target Store

I came upon these two bits while perusing Gawker.com this a.m.

One is that my favorite department store Target is setting a "Gimp" costume from American Horror Story.  I'd recommend trying this one on in the story before purchasing it.  Maybe walk around a bit to see how it feels.

The second bit is from our Turkish filmmaking friends (or should that be "fiends?"), with the "Worst Movie Death Scene."  Some chick is shooting some dude sporting what I call a "split-level" mustache.

Posted by Michael at 1:08 PM No comments:

Whichever idiot in charge of the Fox Network at that time axed the series after airing just 11 episodes.  They even ran the episodes out of order (plus, they didn't bother to air the pilot until just as the show was canceled).

I grew up on re-runs of Star Trek: TOS, so that is my favorite tv show.  Firefly is a close second.

Series executive producer Tim Minear shares some memories of the final moments of production in this piece from MTV's Splashpage.
Posted by Michael at 11:26 PM No comments: 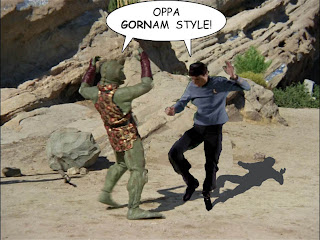 Screencaps from Trekcore. Star Trek is Copyright 2012 and a Registered Trademark of CBS Studios, Inc. No infringement of those rights is intended with this parody.
Posted by Michael at 11:24 PM No comments:

Okay, who the frak is responsible for this?

Manimal is coming back from the dead. (This according to io9.com.)  That's right that little seen Glen A. Larson "gem" from the early 80s is apparently being brought out of mothballs - or in this case, the taxidermist - to star in a feature film.  And instead of Stan Winston's man-to-animal makeup transformations, we will get CGI morphing instead. Whoopee.

Here is the premise of the show: "a wealthy doctor with a mysterious past, who morphed into animals in order to help the police fight crime."

If Ben Stiller is tapped for the lead, I am so there.

The viral video "Gangnam Style" by Korean popstar Psy is so wacky, that it classifies as sci-fi, or perhaps just fantasy, with its Mini-Me kid dancer, F5 tornado winds and the truly odd fashion sense of the singer (K-Pop meets The Hunger Games' Effie Trinket).

Regardless, it's a fun, bouncy number that's taken the interwebs by storm (and by horsey dance).

Posted by Michael at 8:31 PM No comments:

Flotsam and Jetsam for a September Friday

This week's Award For Best Headline is found at io9.com: Resident Evil: Retribution: Your Punishment for Loving Action Movies.

Stan Lee's Comikaze  multimedia convention is this weekend at the L.A. Convention Center.  Awesome guests include Adam West and Burt Ward (forever to be Batman and Robin to those who grew up in the 1960s and 70s), the beautiful and talented Internet goddess Felicia Day, and if he can take the Toronado down off blocks to get there, Joe Bob Briggs.

And, get this, there is even a Zombie Apocalypse maze to run through! Maybe we'll see fellow convention guest and The Walking Dead star Norman Reedus dodging the walkers (maybe not).