Star Trek Beyond Goes On An Adventure In New Trailer

Now that's what I'm talking about!

Paramount Pictures FINALLY held their little soiree Friday to promote the release of Star Trek Beyond, which is one of the crown jewels in their possession and celebrating its 50th anniversary this year.  Yahoo Movies has a brief write up with some nice photos (here).

The first trailer released in December was underwhelming to say the least (here). I wonder if they considered the irony of how the Beastie Boys' song "Sabotage" which played over the entire trailer helped to subvert any momentum they were trying to build with the teaser.

This new trailer Paramount unveiled on Friday (here) is the right way to go: we get strange new aliens (with the great Idris Elba as the new antagonist), new locations, action, adventure, drama and amazing visuals (including lots of cool new uniforms for our Starfleet heroes) - and no Beastie Boys.  (I'm fine with the Beasties making a sonic appearance in the movie, just not as the primary musical backing in a Star Trek movie trailer.)

Posted by Michael at 5:33 PM No comments:

I have yet to see Batman v Superman: Dawn Of Justice.  The movie opened HUGE in March, breaking/setting records.

But then word of mouth spread, and week two, week three, and more came and the movie's fortunes dwindled. Oh, it made money for Warner Bros. studio and the producers (to the tune of $863 million worldwide).

But we live in a cinematic world where $863 million is a disappointment.  We live in a moviegoing world where there are - to date - 24 films that have grossed more than $1 BILLION each (that's domestic + foreign grosses).  That's BILLION, with a "B",

Batman and Superman are the oldest known superheros around today, having first been published in comic books in 1939 and 1938 respectively.  They both have had successful turns in theaters.

But finally putting them TOGETHER in one blockbuster movie, oh, this should have been another Billion Dollar Baby.  But only if the movie was good.

When it was announced that WB was releasing a movie featuring Batmand AND Superman, not only were the rapid fanboys interested, but it got the general public's attention.  They WANTED to see a movie which, for the first time, featured these two legendary, mythical, American heroes.

But WB fumbled that ball and made a grim, dark joyless movie.  And the public told those closet to them to sit this one out.  Go see Zootopia or see Deadpool again.

In comparision, Sony recently revealed that in next year's reboot of their Spider-Man movie series, titled Spider-Man: Homecoming, Robert Downey Jr will appear as Tony Stark (and likely in his Iron Man getup too).  That sentence got not only the fanboys' attention, but the public's as well.

Mark my words, that sentence is worth at least $500 million in movie tickets worldwide.  And since this new Spidey movie is being produced for/with Sony by Marvel Studios head-honcho Kevin Feige and his brain-trust, it should be as enjoyable as the best Marvel movies.  If it's good, there's the other $500 million, and you have another Billion Dollar Baby.
Posted by Michael at 6:36 PM No comments: 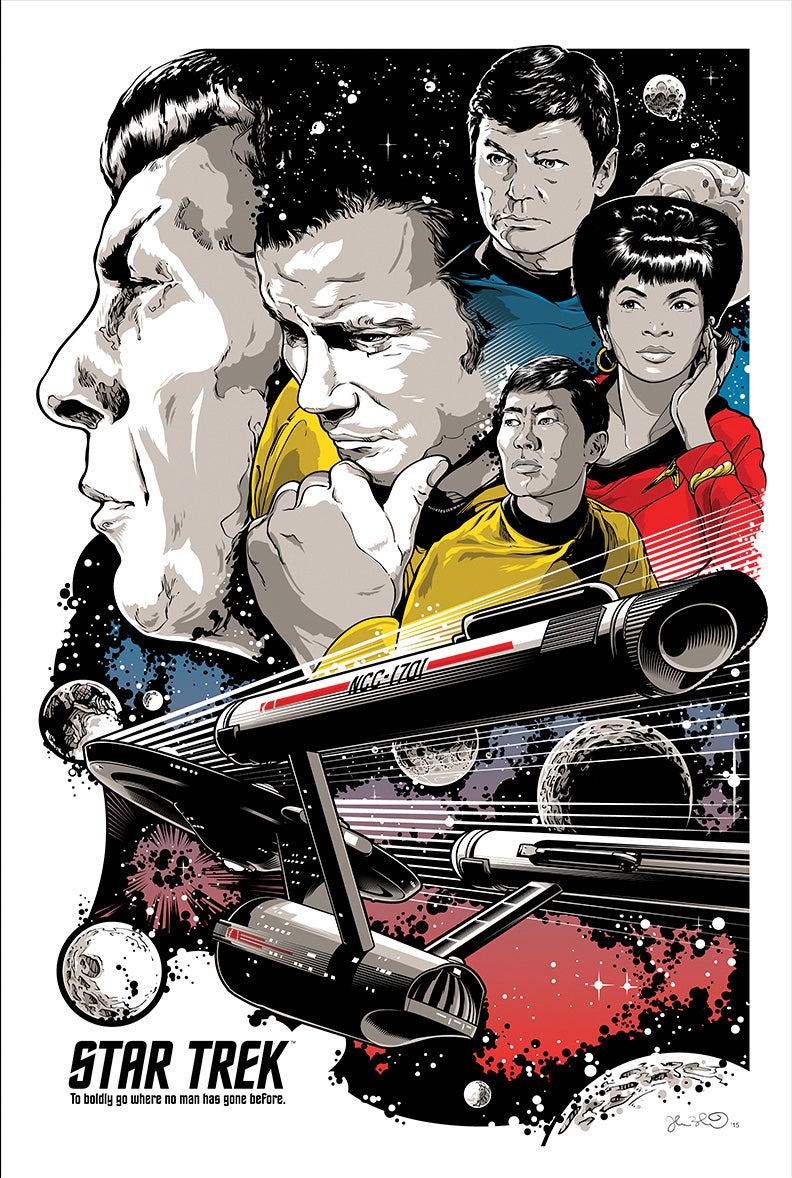 Art copyright by Joshua Budich. Star Trek is a Registered Trademark of CBS Studios, Inc.
Posted by Michael at 1:39 PM No comments: