Cuba Breaks Out A Zombie Comedy

First there was Dawn, then came Shaun, now there is Juan of the Dead!

Coming out of Cuba of all places, this movie looks like there is an actual story at work, and not simply a broad parody approach/rip off.

Horrorsquad.com has the rundown and some video.

Cross your severed fingers that Juan of the Dead is a winner.
Posted by Michael at 6:07 PM No comments:

Stick with The Third Kind

With those words - heard at the start of the picture - I knew I was going to hate this movie. Instead of a simple card reading, “Based on a true story” or “Inspired by true events,” the filmmakers chose to play this goofy game by having its lead actress come out and say she’s an actress playing a character based on an actual person, but one whose name has been changed to protect her identity (you following this?).

The problem is it’s all a bald-faced lie. There is/was no Abigail Tyler, nor any of the other “real/pseudonymous” people “portrayed by actors” in this movie. It’s like the marketing department took over from the filmmakers. It’s a gimmick, and a badly thought out one at that. Moviegoers have seen enough footage on the news to know that shaky, videotaped scenes feel "real" or documentary-like, especially when compared to the the slick movie footage. But instead of clarifying things, all the onscreen titles and pronouncements merely come across as muddled and confusing, as if the filmmakers weren't sure of what they were telling.

The movie has tremendous fun with its audience by employing split screens showing the “actual” videotaped patient sessions with the movie’s “reenactments.” Also whenever a main cast member shows up in the movie, we get helpful titles like, “Will Patton: Actor, Portraying Sheriff Fred Gravy” or whomever. Egads. You just want to yell, "Stop it!" at the screen (which I did many times).

Someone tell me why the “actual videotape footage” of the “actual patients” always goes scrolling up into electronic gobbledygook just when things start to get interesting? I’m talking about patients levitating interesting. The aliens aren’t around. There are no implants we know of to interfere with the camera. The doctors all witnessed these levitations, but we’re denied the actual footage, even in the “fictionalized movie version,” not just the “actual videotape.”

It’s all just a big tease, leading to nothing. And who likes being teased in this manner?
Posted by Michael at 7:42 PM No comments:

You'd have to be crazy to watch Pandorum

In space no one can hear you yawn.

Pandorum is the latest riff on the “haunted house in space” theme, of which the movie Alien is still the finest example. Pandorum borrows that Ridley Scott movie’s dark, dirty, claustrophobic spaceship interiors, but not its sense of intelligence, pacing or creepy chills.

Right from the start, Pandorum throws a bunch of numbers at us (used to help confuse the viewer until the big “twist” at the end) that inform us that Earth’s population has grown over the decades, until it got so bad and over-crowded that humanity had to build a giant spaceship to send settlers to another world called Tanis.

It is on this ship, Elysium, where we find crewman Bower (Ben Foster) just awakening from hypersleep. In a goofy plot contrivance, Bower doesn’t remember details about their situation or mission – darn that extended hypersleep side effect! – and neither does Payton (Dennis Quaid), Bower’s c.o.

So Bower goes exploring, leaving Payton to monitor him from a computer terminal, and he soon runs into fast-moving, howling, shrieking creatures - that call to mind Mel Gibson whenever he's pulled over - and lucky for him, a couple of other human survivors, Nadia (Antje Traue) and Manh (Cung Le) who apparently learned kung fu ninja skills during the ship’s long voyage. They’ve been fighting off the creatures for some time now, which is hard to accept when in one scene the movie shows it takes all three of them to kill just one creature, which resists getting limbs chopped off and machete blows to the head that would have done Jason Vorhees proud.

Soon, Payton finds another crewman, Gallo (Cam Gigandet, from Twilight) and things get goofier from there. We have to figure out who is experiencing the Pandorum of the title, which is supposed to be a condition brought on by extended space travel, where a person goes bonkers, hallucinates, and tries to kill a bunch of space-folks.

I nodded off about half way through this sucker and had to continue watching it the next day. There is nothing new here really, and quite frankly, too many scenes recall Alien. At one point Bower is in a shaft and his position is represented on Payton’s console as a little pulsing light with a trails of dashes behind it, just like in the Dallas air shaft scene in Alien. You may say, “homage” but I say “boring rip off.”

The production design looks very industrial, but also not very interesting; everything looks like a grungy factory instead of the last spaceship "ark" humanity ever built. Once again, Alien did a far superior job with fantastic futuristic sets and grungy interiors. During several scenes in Pandorum I just kept thinking, “Why is this area of the ship SO HUGE; they’re wasting so much oxygen (especially if resources are so thin).”

Ben Foster was great in a supporting role in 3:10 to Yuma, and I liked him in X-Men 3, but he doesn’t impress me here as a leading man. Dennis Quaid seems a little looser than he did in G.I. Joe, which is a good thing. The other actors are fine, but the story is too thin and not scary at all, and like a bad M. Night Shyamalan film (which is his last three or four), the whole thing rests on the twist(s) at the end, which weren’t very interesting/plausible and the more you think about it the whole movie unravels even more.

And when you find out about the creatures running around on the ship, you don't go "Cool idea!" but "Come on, you're kidding, right?"

Star Trek is Copyright 2010 and a Registered Trademark of CBS Studios, Inc. No infringement of those rights is intended with this parody. Screencaps from Trekcore.com.
Posted by Michael at 11:16 AM 1 comment:

No Bark and No Bite 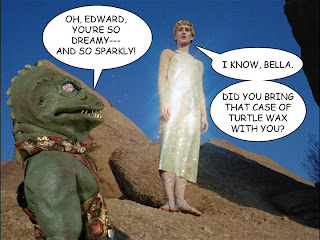 Against my better judgment – which admittedly would fill the average thimble – I checked out the second installment of the “I Can’t Bear To Live My Life Without You” tween angst phenomenon that is Twilight: New Moon.

WHY DIDN’T ANYONE STOP ME?

I wonder if the filmmakers, or at least the studio honchos, ever said, “This will be OUR Empire Strikes Back” which might account for the bleak and depressing tone of this movie. But while Empire was a darker film in tone from the original Star Wars, it advanced the characters and story in every way possible. New Moon doesn’t do anything of the sort. And I kinda liked the original Twilight, as my review of that movie will attest. (I much preferred Buffy the Vampire Slayer's take on the teenage girl/vampire romance, but at least I wasn't bored watching Twi-1.)

In the sequel, we simply get scene after scene of Bella and Edward (Kristen Stewart and Robert Pattinson) glowering at each other. They don’t do much else. Their entire relationship is based on their obsession with each other. That’s it. I generally like Stewart, but she really annoyed me here with her non-personality. She appeared stunned through 90% of the movie, and I don't believe she ever really smiled either (come on, even Goth chicks smile once in a while).

In part two, we get Shirtless Boy Werewolf Boy (Jacob, played by Taylor Lautner, who HAD to have used steroids to get so big so fast). He’s the substitute obsession for Edward when our sparkly once-and-future bloodsucker racks up the frequent flier miles and ankles to Italy to hang with the vampire royal family. Or something. Lautner lets his muscles do all the acting, which is fine because he really cannot emote (but he can sure flex).

Edward’s absence leaves Bella to awake SCREAMING from nightmares for MONTHS ON END. You’d think after just a couple days of this, Bella’s pappy would have sent her to a therapist, but that is not the white man's way.

This movie is so dumb it hit the audience over the head with its Romeo y Juliet parallels BY HAVING THEM LEARNING ABOUT R & J IN SCHOOL, and even having Big Rob Pat recite some lines (by unbeating heart, natch).

This movie was simply way, way too long, with interminable stretches where NOTHING happens, except characters staring at each other (and often doing so in the rain - oooo, dramatic no? No.). I think Woody Allen should dub in a new dialogue track, as he did on What’s Up Tiger Lilly? This might be the only thing to save this movie from the scrapheap of history.


Star Trek is Copyright 2010 and a Registered Trademark of CBS Studios, Inc. No Infringement of those rights is intended with this parody. Screencaps from Trekcore.com.
Posted by Michael at 9:58 PM 1 comment:

I just saw this new diorama from Sideshow Collectibles depicting Yoda's swanky (or is that swampy) pad on Dagobah.

I looks pretty neat, especially with the Luke and Yoda figures inside it (what, no R2-D2 peeking in).

The detail is amazing, with all the dishes, flatware, and odds and ends. But what really gets me is Yoda's FLOOR MAT at the entrance.

Although instead of "Welcome" it should read, "In you must come! Yes!"
Posted by Michael at 11:07 PM No comments:

It was an Episode I: The Phantom Menace tie-in from back in the day.

It was a very detailed Jar Jar Binks head, with his TONGUE thrusting out at you, and you sucked on that candy goodness.

It's all here in this Topless Robot article.

Now if you'll excuse me, I gotta go throw up. Lots.
Posted by Michael at 6:08 PM No comments:

It's Friday, so that can only mean one thing: Slave Leia Car Wash!


(Thanks to friend of the blog BW for pointing this one out.)
Posted by Michael at 7:37 AM No comments: