Await Further Instructions -- Which are to NOT watch this BAD movie!


Nick Milgram and his Indian girlfriend Annji show up unannounced to Nick's family home in England for the worst Christmas gathering of all time, seeing as how his family (father, grandfather, sister and bro-in-law) is mostly just a bunch of ugly racists. (Dear mother is not racist but severely repressed.) Things go from bad to worst when they wake up one morning to find the house has been completely sealed off from the outside world and the television starts giving them directions which polarizes this Brexit family. And this is before Comcast Cable shows up!

This is not a very good film. The cast is capable and there are a few ideas at play here (mostly underdone), especially a satire of television, but nothing is given enough care and attention to come to fruition. The story simply leaves too many questions in the mind of the audience.For example, why is almost everyone a racist in this movie? It was made in England so is it meant to comment on the current social/political climate surrounding Brexit? Not really. Racist in chief Grandpa (David Bradley from Harry Potter and Game of Thrones) is a thoroughly ugly and nasty person, who immediately upon meeting Annji comments about her skin color and later uses the vilest of terms to refer to women. Why? Why not, the movie says. What does any of this mean?

Nick's father Tony (Grant Masters) is a by the book, follow the rules man. Since he is the head of the house he sets the course for everyone and decides to blindly follow whatever instructions the TV puts forth, no matter how ludicrous or insane they may seem, for example the screen directs them to "inoculate" themselves against some unstated airborne poison and provides them with syringes - used syringes EMT Annji points out - with which to do so. Why on Earth would anyone who isn't a heroin addict use an unclean needle? Tony doesn't even blink an eye in hesitation; he just grabs a syringe and injects himself and instructs the rest of the family to do the same, including his very pregnant daughter.

Perhaps if Tony had some military background - the movie doesn't make it clear what he does for a living - that might explain his blindly following the instructions coming over his television screen. The fact that there is no official UK logo or any agency identifier at all like "From the Ministry of When Things Go Tits Up" doesn't raise any red flags with anyone in the house. It's just brief cryptic text on a plain greenish background, like an old style computer monitor. And everyone is fine with that.

Many if not all viewers watching this type of genre movie will recognize the fingerprints of the great Twilight Zone episode "The Monsters Are Due On Maple Street" on this idea. However this movie was not written by the incredible Rod Serling, who did more in a half hour to show the paranoia of a typical American street tearing itself apart when the power goes out and suspicions flare, than this film does in its hour and half run time.

We have to talk about the final act. The reveal of the "big bad." I mentioned Comcast Cable early on, well after Annji discovered "something alive" in the back of an old TV we soon discover that the things covering the doors and windows are strands and strands of coaxial cable. The monster is MONSTER CABLE! The cables aren't even attached to some creature. The cables, singly and in bunches strands, is the creature. What a serious letdown and a colossally stupid idea.

But the movie isn't done with us yet.

In the ultimate what the f-ck, pull it out of your ass ending, the cable monster puppeteers Tony's corpse and tells the remaining family members it just wants to be worshiped. But why the hell would you kill off your captives if you just wanted a congregation to fill the pews as it were? The filmmakers quickly kill off all the remaining adult characters leaving Nick's sister's baby alone on the living room floor to stare at the TV screen. I guess celebrated author Harlan Ellison was right about television being The Glass Teat being all that we need.

If this story had its shit together and been smarter we could have had a decent satire of television and its all pervasive influence on us. Christmas time is ripe for this type of thing, as we are bombarded by ads starting in October about Christmas this and Christmas that, and extended store hours, and never to be seen again savings, buy this, buy that, and you can't live without this. The television in the Milgram home could have been on all the time, perhaps with ads for the Christmas ham that Nick's mother was persuaded to buy, and they could have exchanged gifts based on what programs they enjoy watching (and the commercials contained within). Perhaps Nick and Annji as the outsiders too busy in their careers with no time for TV could have been seen as the enemies of the family and the cable monster.

But nothing like this remotely (excuse the pun) happens. There is simply no reason for the ending other than they wanted a "monster" and a big shock. Not that either was earned.

All things considered, there was no reason for this movie. Or any reason for you to watch it.

Posted by Michael at 6:24 PM No comments: Links to this post

We love poking fun at Rob Liefeld, the lightning rod artist known for co-creating X-Force for Marvel Comics and for being one of the seven artists to quit Mavel to start up Image Comics with his Youngblood series.

Liefeld has had great success in comics but, let's be honest here, the dude, a self-taught artist, can't draw his way out of a paper bag. He is (in)famous for wonky anatomy, not being able to draw hands or feet, absurd poses, and for "pouchifying" his costumes. Additionally, his character names leave something to be desired: Bloodpool, Task, Badrock, Bloodstrike, Blahblood, and Bloodblah. (Those last two might not be real.)

While perusing some Twitter posts with vintage Ghost Rider art, I wondered what that character might look like under a Liefeldian revamp. Would we be staring at the vacant eyes of Blood Rider? Blaze Rider? How about Pouch Rider or Ghost Ghoster? I got it: Ride Rider! 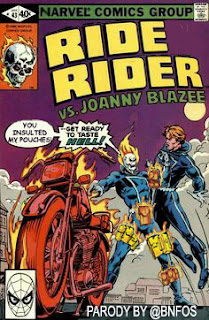 Don't insult Ride Rider's pouches. You won't like him when you insult his pouches.
Posted by Michael at 9:47 AM No comments: Links to this post