Nothing new on the CGI front: the ship looks TOTALLY computer generated and the “realistic” planet, Capella, looks more fake than the original 1960s version.

I am convinced this episode was written by a schizophrenic. Every time one position is stated as fact, it is soon refuted. Eleen wants to die. Then she says, “to live is better.” Maab kills the ruling Teer because he wanted to explore more options. Shortly after, Maab says, “perhaps to be a Teer is to see in new ways.” McCoy who had previously studied the Capellan culture states they shun medicine, believing the weak should die; he knows and understands their customs. Then McCoy goes out of his way to help Eleen. I know he’s a doctor and all, but to force his beliefs upon her seems wrong. (I know Kirk does this all the time, but still.)

My main man Maab looks like a steroidal Johnny Carson. I hate to see what Ed McMahon looks like.

The Klingon - who is called only "Klingon" in this episode, but has a name, Kras, in the end credits - has Wolverine's sideburns, which are cool, but then he also has thinning hair, which is not cool.

I love this one bit toward the end. Kirk and Spock are crouched behind some rocky outcroppings and a Capellan soldier sees them and reports this to Maab. Seconds later, Eleen comes over and says she killed Kirk’s party as they slept. The Klingon wants proof, but Maab says “she’s the wife of a Teer” and that’s all the proof they need, and they turn to leave. The Klingon runs up the hill and is shot by Kirk with an arrow and all hell breaks loose. Why would Maab just call it quits because Julie Newmar comes back and why does her “word” mean anything? She’s the wife of the guy he JUST KILLED so why does that carry any weight? Just before the Klingon ran up the hill, she says “I want to die in my own tent” or something. Again, with the schizophrenic back and forth!

This episode came in the middle of season two, so the show’s writers and producers had a while to figure out the characters and such. Look at this exchange between Kirk and Spock just before the big blowout.

Kirk: There's just one thing I want.
Spock: The Klingon?
Kirk: One of us must get him.
Spock: Revenge, Captain?
Kirk: Why not?

Isn’t that just a bit out of character for Kirk?

Lastly, this only hit me when I was watching the closing credits and I saw all the character names spelled out: MAAB, AKAAR, ELEEN, DUUR AND KEEL. What’s with all the “vowel stuttering?” Fu-uck me-e. 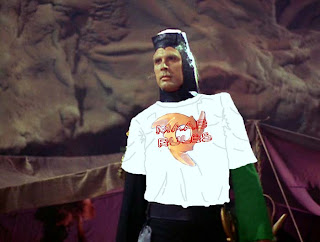 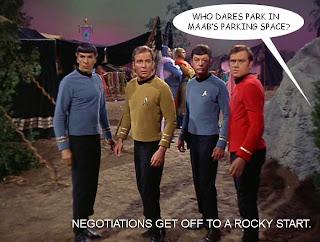 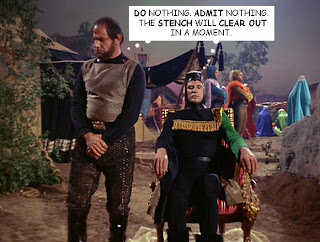 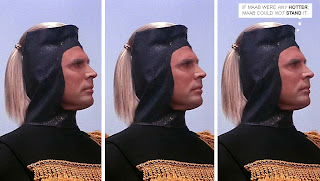 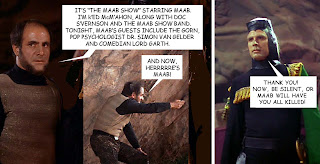 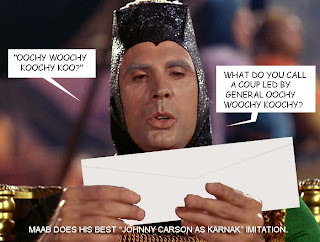 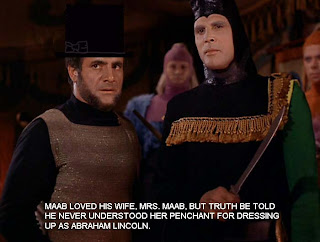 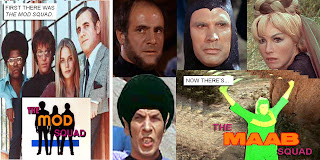 Disclaimer: Star Trek is Copyright 2008 and a Registered Trademark of CBS Studios, Inc. No infringement of those rights is implied.
Thanks to Trekcore.com for the Star Trek screencaps.
Posted by Michael at 2:04 PM