This one has it all, "it's got sex, it's got violence, it's got the ethnic angle." It even has fez-wearing midgets with gold-painted faces. This episode rocks.

Nice new CGI shots of the Enterprise gliding by the camera. I wish I could check them out in HiDef. One funny thing they did was when the enemy ship was zooming by the Enterprise they cut to a scene looking across the saucer section and the double phaser blasts from below are following the enemy ship trying to zap it! It looked more silly, I guess, than cool. They do a nice new CGI shuttle and hangar bay (complete with planet Vulcan seen outside the hangar doors) for Sarek's arrival at the beginning, though I'm tired of them showing the pilot and co-pilot faces in the shuttle windows when on the actual shuttle set their heads are WAY BELOW the windows. Maybe they use barber chairs that telescope up?

Someone tell me why for Sarek's exit from the shuttlecraft the music they chose is the drum beat beginning to the Amok Time fight scene music? Were they trying to make it into a Vulcan theme? I was expecting Sarek to come out with that big stick with the blade on one end and start chopping off heads.

It's funny but as I was watching this episode, I was really admiring the group of guest actors they got: the always creepy Reggie Nalder as the creepy senior Andorian, William O'Connell as Thelev the saboteur, even the actors playing the Enterprise security guard and the Tellarite ambassador were good. Not to mention Mark Lenard and Jane Wyatt. In reading Jeff Bond's review of this episode at trekmovie.com he ALSO goes on about the great guest actors, singling out Joe D'Agosta, Star Trek great casting director for merit. This one has it all: great character bits, humor, suspense, Kirk kicking ass (all Shatner, no stunt double!), new cool aliens, family drama, a space battle, father/son tensions, midgets putting bean bags into drinking glasses, galactic intrigue, and McCoy trying out his new ham smoker. 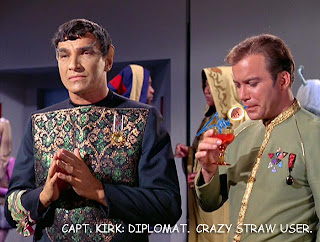 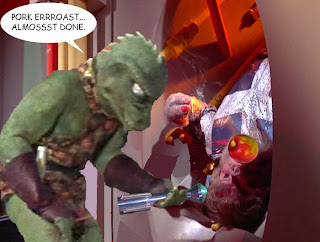 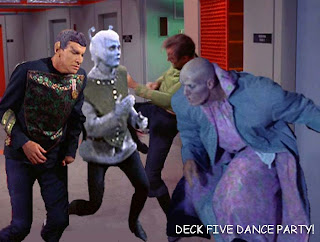 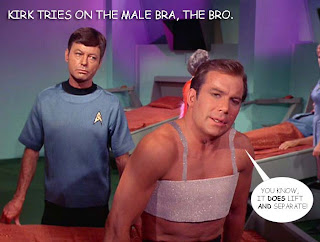 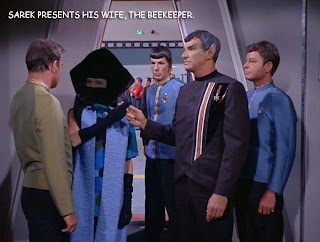