Star Trek Remastered. "Court Martial." (Or as I thought of it as a wee lad, Court Marital.)

Some neat new CGI shots in this one. They show us where the Ion Pod is located -- since Finney hides out in Engineering, for logic's sake they put the pod near the Hangar Deck. There's even a quick shot of them installing a replacement pod. The starbase is "swarming" with ships and shuttles, including a ship that's taken right from the animated series.

And, of course, in the re-vamped starbase matte, they have tiny Starfleet Office Drones milling about, fighting with indignant copiers and filing TPS reports, just waiting for 1700 hrs til they can go to Chochtkie's across the street and blow off steam.

One thing I never noticed before is that in Commodore Stone's office, the plant he has in the background is none other than the SPORE PLANT from "This Side of Paradise!" Yikes!

All the members of Kirk's Starfleet graduating class are a bunch of dicks. Every last one of them.

That green flowery dress/sarape that Areel Shaw wears when she's off duty is perhaps the UGLIEST dress ever seen in Star Trek. And the actress is a hottie, which makes it all the more a shame.

In the Starbase courtroom scenes, the records guy who turns the computer on and off looks just like Olympic cyclist Lance Armstrong. The asian woman playing the Enterprise records person testifying in court must have been a producer's girlfriend or something; she is terrible.

The actor playing Ben Finney is a chunk of a man, very barrel-chested. So of course in the big fight scene they got a stuntman who looked nothing like him. Pairing him with the Shatner stunt double who looks nothing like him either and you get a wacky fight scene like no other.

I would like to read those letters and papers, Jamie Finney said that Ben Finney wrote to his daughter and wife. "Dearest Susan and Jamie, How are you? That Captain FUCKING Kirk made me work again this week - 8 stinking hours a day for a whole freaking week. I hate that fucking guy. I'm either gonna shit in his soup or monkey with the computer to frame him. I haven't made up my mind. I hope you are doing well with work and school. Write soon. Love always, Ben (Dad)."

This is the episode that as a kid made me think Captain Kirk was the coolest. They detail all the pressures put on the man in command. Spock and McCoy backing him up unquestioningly (too bad Scotty wasn't in this one too). And Shatner's delivery on the witness stand is absolutely perfect. After seeing the damning evidence, I love it when he whispers, "But that's not the way it happened." Hand the man an Emmy!

The whole Kirk's ex-love interest thing was an odd subplot to leave in, especially since it was never brought up in light of the fact that Kirk and Finney's relationship was a key element of the trial. They could easily have left that out and it wouldn't have mattered to this story. In the end, after the trial, Areel Shaw could have the hots for Kirk. That would have been a better way to handle an attraction angle.

Jamie Finney looks like a sister/cousin to Patty Duke from "The Patty Duke Show" -- "An ion storm makes her lose control, what a crazy pair! Cuz they're space cousins! Identical space cousins." 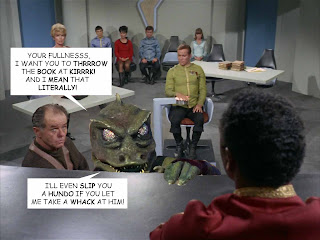 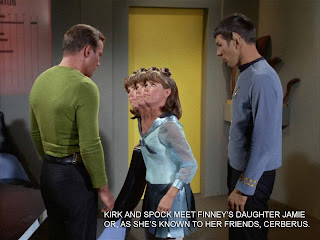 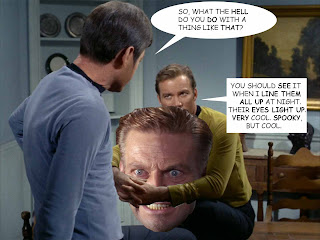 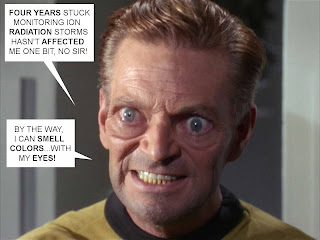 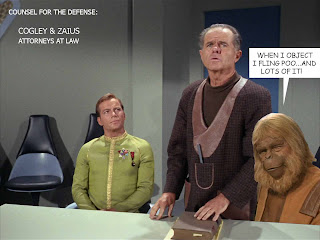 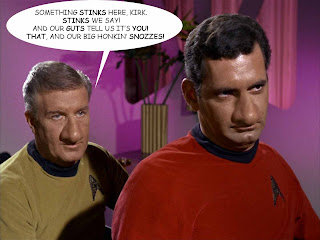 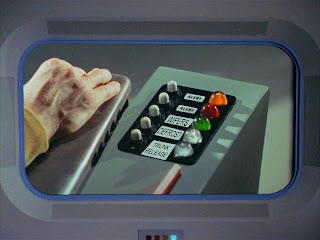 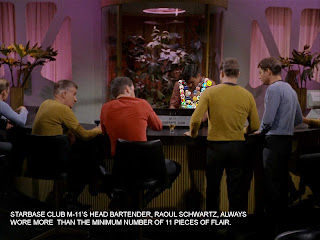 Disclaimer: Star Trek is Copyright and a Registered Trademark of CBS Studios Inc. No infringement of those rights is implied.

Thanks to Trekcore.com for the Star Trek screencaps.