Lord Flashheart where are you?

Star Trek: The Next Generation – “The Outrageous Okona”

Han Solo comes aboard the Enterprise when his hunk of junk needs some repairs. Meanwhile, the Hatfields and the ‘Coys threaten to blow up the Enterprise real good unless Picard accedes to their wishes. And for no good reason, Data tries to be a stand up comic.

Let’s look at that title: “The Outrageous Okona.” The Merriam-Webster online dictionary defines “outrageous” as, 1 a : exceeding the limits of what is usual b : not conventional or matter-of-fact : fantastic 2 : violent, unrestrained.

Do any of these define the flaccid portrayal of Okona (William O. Campbell)? He’s not a bad boy or a jock. He’s not a biker type. He’s just a good looking, clean cut young man (okay, he needs a shave, but he's still "clean cut"). Nothing Okona, does is particularly "outrageous." Yes, he makes a questionable space living, but he's not overbearing. Yes, he bangs half the Enterprise’s female staff, but he's got no swagger. When I think of outrageous I think of Black Adder’s Lord Flashheart (“She’s got a tongue like an electric eel, and she likes the taste of a man’s tonsils!”).

I know they were hoping for more of a rugged Harrison Ford/Han Solo-type (Okona is a space pirate), but Campbell simply isn't it. He'd make a great adult Wesley Crusher. It’s not Campbell’s fault, it’s the producers and the casting people. (Just a couple years later this same actor, as Bill Campbell, would play the clean cut Cliff Secord in The Rocketeer, one of the best fantasy action films of all time. He was perfectly cast there.)

This episode had a complete non-story. None of the Enterprise regulars was involved in any way, other than to move the plot along. You’d think that they would have at least developed an Okona/Troi romance to give the story some sort of reason for being, but all the women Okona was involved with were guest stars/extras.

The two sparring planets/families of course have a dispute with Okona – one family accuses him of getting their daughter pregnant, the other of stealing the literal family jewels. To make matters worse, for once the Enterprise is absolutely and unequivocally superior to both planets’ ships and tech. They have NOTHING to worry about, but Picard plays peacemaker anyway. He should have charged them a fee for his family counseling services (isn’t that Troi’s department anyway).

This was like a goofy new Outer Limits episode that was adapted for TNG, but they forgot to somehow, I dunno, INVOLVE THE ENTERPRISE REGULARS IN WHAT WAS GOING ON.

To reiterate, THERE ARE NO DRAMATIC STAKES HERE WHATSOEVER.

There’s a silly moment when Worf finds Okona in some crewchick’s quarters and Okona gives him the “s’up?” look, aka, “Do you wanna throw down?” And Worf is all, “I’d like that but Capt. Picard wants to talk with you, which would be hard for you to do if I shove my fist through your head.” This was a serious non-moment; it was comparable to Joel McHale threatening The Rock.

But the weirdest moment was when Okona and Wesley Crusher meet in the transporter. Okona mistakes Wesley for Data and from that moment on Wesley is like a school girl, all smiling and giggly at Okona. Look out, someone’s got a boy-crush (not that there’s anything wrong with that).

To add insult to all this injury, the B-story is Data trying to understand humor by going onto the holodeck and taking lessons from a mulleted Joe Piscopo. READ THAT SENTENCE AGAIN. It’s silly, Data of course doesn’t “get” humor and it all leads to a Henny Youngman-type joke at the end.

Crap, but this was a terrible episode in every way, shape and form (except for seeing Teri Hatcher in spandex). 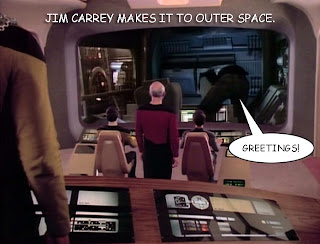 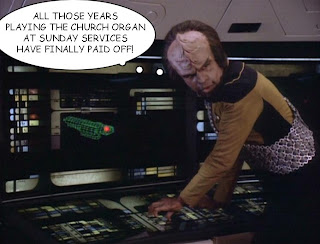 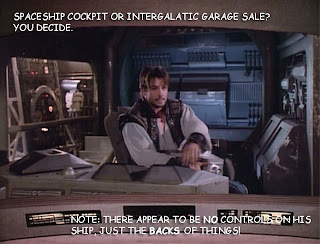 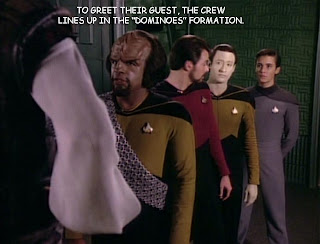 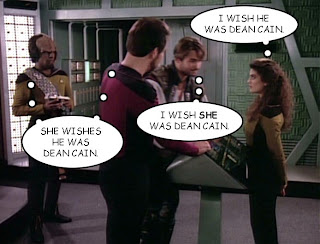 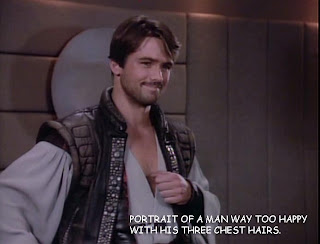 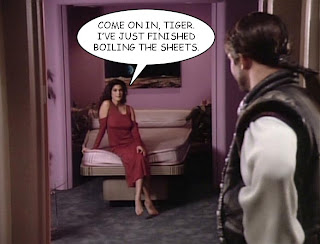 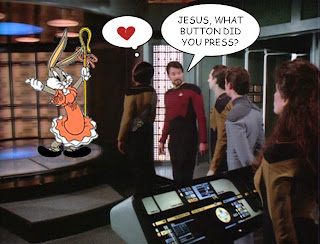 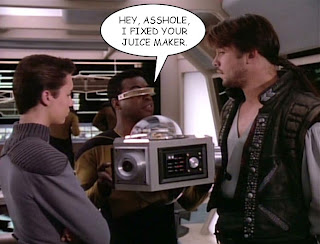