Baskin Rogers and the 25 Flavors of the Century

Viewers of a certain age may fondly recall the NBC sci fi series Buck Rogers in the 25th Century which ran for two season (1979 - 1981).

Created by the soon to be legendary Glen A. Larson, the first season was mostly a very watered down James Bond in Space, where Buck would woo the hottie of the week while fighting the bad guys, which wasted the charm and talents of the lovely Erin Gray as Col. Wilma Deering.

Network audiences weren't ready for a female in charge of things in the disco era so Wilma had less and less to do. It got so bad that in the second season, new producers junked the first season's template and tried to copy Star Trek by having Buck, Wilma, and Twiki team with some new friends on a mission to find lost Earthlings. Think of it as Battlestar Galactica (same producer) in reverse.

Remember I said they wasted Erin Gray. Look at this season two cast photo. They ditched the black and white military uniform (and pants) for what looks like a sailor suit or the person behind the counter at an ice cream shoppe. Baskin Rogers, anyone? 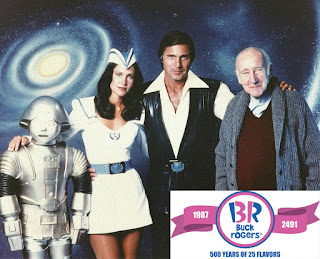